1.2 to 1.7 billion.  56 Countries and the PLA are members of the Organisation of the Islamic Conference.
Added 7 May '12:  Growth rates of Muslim and other religions in the US.
Muslim demographic trends (worldwide):

The Pew Research Centre released a study in January 2011 of Muslim population growth world wide (here).  The figures for Europe are summarised in the chart below. Downloadable PDF here. 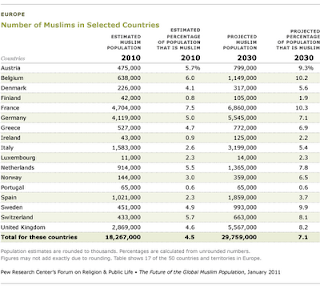 Muslim attitudes to democracy, the rule of law and terrorism:

This section addresses the oft-heard view that there is just “a tiny minority of extremists” in an otherwise moderate, benign and peaceable Muslim congregation.  Depends what you mean by moderate and benign, of course, but let’s just take it as being a common-sense understanding: we expect moderates, in any religion, to abide by the laws of the state, to live and let live, to pursue their religion in private and to show tolerance to the views of all in the community.
The statistics do not support the widely-held belief that the vast majority of Muslims are moderate and peaceable in the sense above.  Large minorities, in some cases majorities, support terrorist actions and favour imposition of Sharia law.
Muslims in the west:

ICI Research added 12 May 2016.  More than 100,000 British Muslims support suicide bombers and terrorist acts.  23% of British Muslims say Sharia law should replace UK laws. 52% say homosexuality should be illegal.  39% say women should always obey their husbands. [April 2016 Poll]
53% of British Muslims believe Islamic values are “not compatible with British values”. Ref
55% of British Muslims either support terrorism or say they want Islamic Sharia law in the UK rather than England’s democratic system. Ref.
40% support for Sharia in the UK; 33% want a worldwide Islamic caliphate and the same number believe that killing for Islam is justified; 40% don't think men and women should mix freely; 24% don't think men and women are equal, 25% don't like gays. Ref.
25% of British Muslims believe the July 2005 terror bombings in London “were justified” [that's about 700,000 British muslims].  But...
A more conservative estimate is given by the UK Security Service. "Only" 100,000 UK Muslims believe the 7/7 attacks were justified....

“…my officers and the police are working to contend with Some 200 groupings or networks, totalling over 1600 identified individuals (and there will be many we don't know) who are actively engaged in plotting, or facilitating, terrorist acts here and overseas..... This view is shared, in some degree, by a far wider constituency. If the opinion polls conducted in the UK since July 2005 are only broadly accurate, over 100,000 of our citizens consider that the July 2005 attacks in London were justified”.

Note: The "Harsh Punishments" mentioned above are mandated by Sharia law.  See Undat al-Salik, the Classic Manual of Islamic Jurisprudence.  It specifically mandates each of the above penalties.

This section addresses the oft-heard complaints by Muslims and non-Muslim apologists that there is a rash of “Islamophobia” in the west, directed with bigotry towards Muslims.  The figures on hate crimes in the US – a reasonable statistical proxy for “Islamophobia”  – show that the opposite is the case.  Hate crimes against Muslims are low and have been declining.   Moreover, they are significantly lower than similar crimes against Jews.
UPDATE (18 Dec 2014):


The FBI’s newly released hate crime statistics for 2013 offer a fresh example of how reality refuses to conform to the dubious narrative of widespread Muslim victimization at the hands of American bigots. As in previous years, most hate crimes were not religiously motivated, most religiously motivated hate crimes were anti-Jewish, and Muslims suffered fewer total incidents than many groups and fewer per capita than gays or Jews. Anti-Islamic crimes did not involve greater violence than others and have not become more frequent. A glance at the details.... [source]

Islam and Relationship to Political and Civil Freedoms: 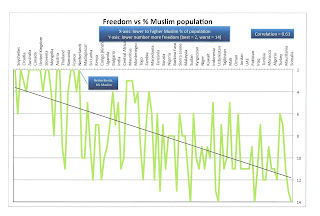 There is a statistically significant relationship between political rights and civil rights on the one hand and the percentage of Muslims in the population on the other (Correlation = 0.61). There is no country in the world where the population of Muslims is greater than 6% which enjoys the highest level of civil and political rights.  See chart above, where countries along the top are in order, left to right, less to greater percentage of Muslim population, and the political/civil rights are on the right hand axis, with higher number the less free.  The best-fit trend line indicates that the higher the Muslim percentage, the worse the political/civil rights, with a correlation of 0.61.  Ref.
To anticipate criticism that the above chart is "racist" or "Islamophobic", or that correlation does not imply causation,  I make these points: (i) Islam is not a race. The correlation is between an ideology -- Islam -- and civil & political rights. (ii) The Arab Development Report of 2009 made similar points about the backwardness of the Muslim world.  (iii) While correlation does not necessarily mean causation, in this case, the causation is a reasonable hypothesis, supported both by the Arab Development Report and knowledge of the rights-inhibiting nature of the tenets of Islam, its doctrines and practices.  In short, supposition of a causation between more Islam and fewer political/civil rights does not do violence to common sense and familiarity with those tenets.

Jihad in the Koran, Hadith and Sirah:

This section addresses the claim that “Jihad” is simply an “inner spiritual struggle” (the so-called Greater Jihad) and that it is not – or not principally – a Holy War (the Lesser Jihad).
The fact is: Jihad is both.  But Jihad is almost always, in the holy books and in practice, holy war against unbelievers.  The “inner struggle” aspect is very much secondary.
Jihad in the Hadith of Sahih Bukari.  Jihad as War = 51.  Jihad as peaceful inner struggle = 8
Percent of Holy War Jihad = 86%
Source: “Jihad in the Hadith, Sahih Bukhari”, Ref.
Amount of text devoted to Jihad: 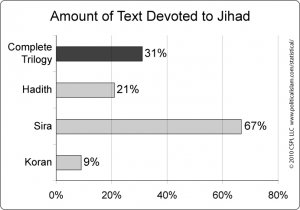 Mosques in the US:
Five studies -- from 1998 to Summer 2011 -- show close agreement: about 80% of US mosques preach "extremist ideology" or carry extremist publications in their libraries.  The detail is here.

A new opinion survey shows that more than half of all Europeans believe there are too many immigrants in their countries and that immigration is having a negative impact on their lives.

The findings – which come as Europeans are waking up to the consequences of decades of mass immigration from Muslim countries – point to a growing disconnect between European voters and their political masters regarding multicultural policies that encourage Muslim immigrants to remain segregated rather than become integrated into their host nations.

Pew Poll on Attitudes of Muslim Americans
Pew Poll of August 30 2011 shows 21% of American Muslims believe there is a "Great deal or Fair amount" of support for Islamic extremism amongst Muslims in the US. [Here]

Pew poll shows around 150 million muslims have "favourable" views of ISIS/IS. Consistent with "What a billion Muslims really think", by Dalia Mogahed and John Esposito", in which the number of Muslims approving of suicide killing of innocent infidels is around 185-210 million.

[1] The Gallup study is immensely flawed, as a critique by Robert Satloff shows.  The book based on the study is devoid of any detailed figures, which must be purchased from Gallup for $US 20,000.  In response to questions by Satloff at a conference on the study, Mogahed said that the figures would be posted on the Gallup site.  That was nearly three years ago, and still nothing.
“Just like us!  Really?”, The Weekly Standard, May 12, 2008, Robert Satloff.