"No" to Turkey joining the EU 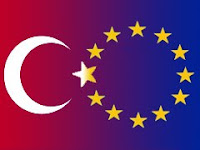 There’s  renewed push to get Turkey into the EU.  Most recently, and shockingly – well, I was shocked – by David Cameron during his visit to Turkey.
Theodore Dalrymple, commenting on another issue, noted:
“An important feature of sentimentality – one that is disastrous in deciding policy – is the mistaking of a wish for the fact. “[1]
David Cameron mistakes a wish for a fact: he wishes that Turkey can be a bridge between the Muslim world and mistakes that for a fact, or an achievable fact.  But this is the sentimental fallacy: and one which, as Dalrymple notes, is disastrous for deciding policy. In this case, disastrous for Europe as well.  Let me explain...
[2 Aug postcript: Peter Hitchens (the younger Hitchens) on Turkey's joining, here.  (hat-tip to RH)].
Cameron's wish that Turkey provide a “bridge” between Muslims and the west and assumes as “fact” that it can happen and assumes further as "fact" that there is difference between “radical Islam” and the nice peaceful Islam of conventional wisdom.  But that is just wish, a chimera, not a fact.

Then there's the experience of Greece.  There's much criticism that it was allowed to enter when it was too poor and unready for the rigours of membership.  Of course the same holds for Turkey a fortiori.
The flag above comes from this website, which covers the Greek factor in a bit more detail. [BTW: I'm not sure the flag is supposed to show what it seems to: the Islamic crescent all but dominating the rest of the EU; but it's apposite, for that's what it would do].
In sum, Turkey’s accession would increase the pressure for Sharia law, would reduce average real wages in Europe, would bring retrograde pressure on social  and minority issues, and is against the clear will of a substantial majority of Europeans.  And for what?  For the “wish” (the hope) that they may be a "bridge" to Islam and stopped from drifting into ever more Islamist arms.

It is far more likely that those arms will drag a culturally ambivalent Europe along the Islamist path itself.
Say NO to Turkey joining the EU! 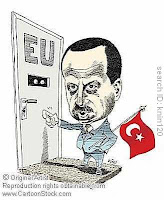