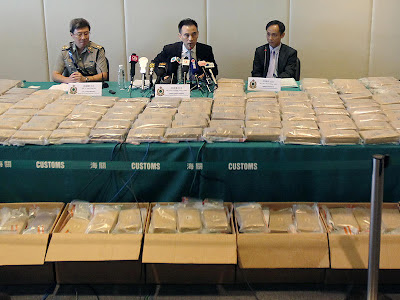 
Yet another photo opportunity: Customs officers in front of a “huge haul of cocaine”.   Yet another boast that the seizures reflect  "determination and confidence to fight against trafficking of illegal drugs”. (“Customs seizes record HK$760 million cocaine haul”, July 7).
Yet another bit of nonsense.
A recent New York Times article notes that the price of cocaine today is 74% cheaper than it was 30 years ago.  This number proves “that the struggle on which they have spent billions of dollars and lost tens of thousands of lives over the last four decades has failed.”
Studies by Harvard University show that legalizing all illicit drugs would produce net benefits to the United States of $65 billion a year by reduced spending on enforcement and less crime and corruption.
Even if we can’t accept legalisation, there are other options. The Global Commission on Drug Policy, with its former presidents of Mexico, Colombia, Chile, Brazil and Poland, has called on national governments to “depenalise” drug possession and sales.
LEAP, an international organisation of criminal justice professionals who have personally seen the wasteful futility and the harms of current drug policies, calls for repeal of probation and replacement with a tight system of legalized regulation (like alcohol).
Why does Hong Kong feel it necessary to parrot America’s failed, costly and dangerous “War on Drugs”?  Why don't we talk about better ways?
We should have the guts to consider these other options – legalisation or “depenalisation” -- rather than exulting in yet another pointless drug haul.  A haul that does nothing to stem the flow and price of illicit drugs.
Or are the photo opps just to hard to resist?
Peter F
- July 07, 2012