"It takes a network to defeat a network". Or, why Islamic extremists are not a "tiny minority"


"... we stand no chance whatsoever of defeating Islamic State (IS) if we fail to understand the significance of its being a true network".

It's a good article, well worth the read and contemplation.
I want to highlight two points in it.
First, the PEW research Ferguson quotes: that IS has:

I've fact-checked that figure, and it's correct: except that on the latest population numbers of the eleven countries from Geohive, the figure is now 67 million.
That's bad enough.
But consider that those figures include both muslim and non-muslim population in those countries.  The PEW report reveals that the muslims in those countries are 2.3 times more "favourable" to IS than the non-muslim populations.
Thus the average number of muslims saying they have "favourable" views of IS is 9%. (My calculations in the spreadsheet below).
If we project that out to the world population of muslims (I'm using latest estimates of 1.5 billion), that comes to 135 million muslims who are "favourable" to the Islamic State barbarians.
And that's likely to be a minimum, for there are another average of 20% who "don't know", some of whom, surely, are likely to be favourable if pressed.  A figure of 150 million "favourable" to the barbaric aims of IS most likely a reasonable estimate.
In any case, bad enough, is it not? That 135 million muslims world wide are "favourable" to the barbarians of IS, who behead, burn alive, drown, shoot, stone and otherwise kill innocents, and who take women prisoners as sex slaves.
This is the point that people like Sam Harris have been making for some time.  Harris talks of concentric circles of Muslims.  In the inner circle, those jihadists who willingly kill "infidels" in the pursuit of the global caliphate.  In the next circle those who do not kill, but support the aims of the killers.  In the third circle those who do not necessarily support the caliphate, but who say nothing to disown its aims.  And in the outer circle -- seemingly the thinnest one -- those Muslims who speak out against any form of Islamic supremacism and in favour of a secular Islam (e.g., Maajid Nawaz).
All this reveals the lie of Obama, who has said that "99.9% of Muslims reject radical Islam".  That is flat wrong, and a shocking lie for a president.  The best estimates, based on extensive polling, is that it's around 10% of the world's 1.5 billion Muslims who positively support the radical likes of ISIS/IS.  If anything, the figure is higher (17%), not lower.
As a final point: PEW is well-regarded and often said to be neutral.  I'd classify the outfit as rather left of centre. Case in point: in reporting the figures, PEW chose the headline:  "In nations with significant Muslim populations, much disdain for ISIS".
Don't you think that the bigger story is the disturbingly large number who have no disdain at all for ISIS, but view these barbaric butchers "favourably"?


My analysis of the Pew figures.  Spreadsheet here. 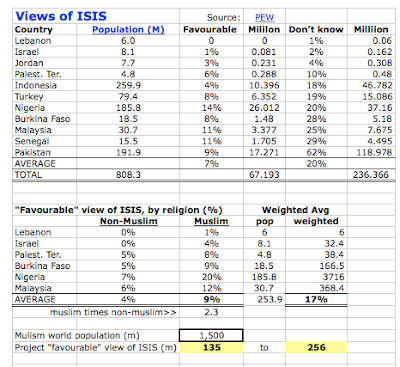 The second major point I want to make is about Ferguson's claim that the need for "networks" means that the UK should not leave the EU.  That cooperation with Europol is necessary.  But Europol has proved to be totally inadequate to facing Europe's Islamic extremist challenges.  There has been virtually no exchange of intelligence between European intelligence agencies and police forces.  I doubt that the US has worse intelligence sharing protocols with Europe, just because it is not a member of the EU.  Why would the UK leaving necessarily harm its intelligence-sharing with the EU, dysfunctional as their agencies may be?

[Later: Pew's spin of the figures (which are surely worrisome), reminds me of the egregious Dalia Mogahed and John Esposito's spin of their book "What a billion Muslims really think", in which they tried to show that only a "tiny minority" of Muslims had radical views, whereas on further digging, Moganed admitted that the number of Muslims who wanted to suicide-murder innocent infidels was around 14%. Let's see, that would be around 185-210 muslims (depending on the total number of muslims worldwide), broadly consistent with my figures above, and in neither case a "tiny minority". See my link to that discussion here]
- April 04, 2016