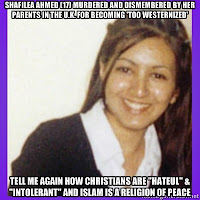 Shafilea Ahmed was killed by her father and mother.  Pious Muslims both, they suffocated Shafilea with a plastic bag in front of her siblings.   A brutal and horrid crime for which her parents have now been jailed for 25 years.
The judge, Roderick Evans, said it was a crime committed for “shame”, based on “social and cultural attidutes”.  Neither he, nor any one of the articles in the mainstream media have mentioned Islam as a factor.  Indeed, if one looks up “Honour killings” in Wikipedia, one finds the claim that honour killings "don’t have 'any definite connection with religion at all'".
In way Judge Evans's comment is correct, in the sense that “social and cultural beliefs” include religious beliefs. So his error was of omission rather than commission.
But to ignore the religious aspect of the "social and cultural attitudes" that led to the murder of Shafilea is to ignore the most important part of the “culture” that made her parents suffocate her to death.  Consider, for example, that  91% honour killings in the world are by Muslims.  In Pakistan almost all filicide is by Muslims; among non-Muslims in Pakistan honour filicide is virtually unknown.  In neighbouring India, the vast majority of filicide is Islamic. Hindu or Buddhist or Jain or Christian filicide is virtually unknown.
So, surely, one should look at what it is in Islam that encourages the notion that it’s “honourable” to kill one’s daughter for becoming “too westernized”.
It’s easy to find the reasons in Islamic theology and jurisprudence.  First, it's the doctrine of "Loyalty and Enmity" and second it's the doctrinal requirement to kill for Apostasy.
The doctrine of Loyalty and Enmity:
This teaches that Muslims should have nothing to do with the hated kuffar or infidel.  That is, a Muslim living in the UK should have nothing to do with non-Muslim British.  There’s a good summary of this doctrine in Raymond Ibrahim’s excellent The Al-Qaeda Reader (p 62 et.seq), a book which should be on the bookshelf of everyone interested in Islamic issues.
A few quick sources for the doctrine from the Yusuf Ali translation of the Koran:
Let not the believers Take for friends or helpers Unbelievers rather than believers: if any do that, in nothing will there be help from Allah… [3:028]
O ye who believe! Take not for protectors your fathers and your brothers if they love infidelity above Faith: if any of you do so, they do wrong. [9:023]
Plus, in a similar vein: 5:051, 5:080, 58:014, 60:013.
These, and other verses from the Koran and reliable Hadith are regularly quoted by Imams, Sheiks and Islamic leaders throughout the world, in Islamic countries and those living in the west.
They require Muslims to hate non-Muslims.
Of course the call for “hate” is not necessarily a call for murder, for filicide. So what was it that tipped Shafilea’s parents to murder rather than to simply “hate” their daughter.  Awful enough to have your parents hate you, but rather better than having them stuff a plastic bag down your throat and holding you down till you stop kicking….
What, in short, caused their “hate” to tip to murder in the name of Islam?
The answer is Apostasy.
For a pious Muslim, like Shafilea’s father, becoming “too westernized” is tantamount to Apostasy from the religion of peace.
And the punishment for Apostasy from the Religion of Peace™is death, as is clear from Islamic jurisprudence. [Ref].
That link immediately above is the summary of the jurisprudence in the Umdat al-Salik. There’s also the reliable Hadith of Bukhari:
Volume 9, Book 84, Number 57: Narrated ‘Ikrima:  Some Zanadiqa (atheists) were brought to ‘Ali and he burnt them. The news of this event, reached Ibn ‘Abbas who said, “If I had been in his place, I would not have burnt them, as Allah’s Apostle forbade it, saying, ‘Do not punish anybody with Allah’s punishment (fire).’ I would have killed them according to the statement of Allah’s Apostle, ‘Whoever changed his Islamic religion, then kill him.
And, to make the filicide even easier for the pious Muslim, there is no penalty for killing one’s child in Islamic jurisprudence:


"Not subject to retaliation is a father or mother (or their fathers or mothers) for killing their offspring, or offspring's offspring." (Umdat al-Salik o1.1-2).

His Honour Judge Evans mentions none of this in his judgment.
I understand why.
First, he probably doesn’t know it.
Second, even if he does, he knows that if he mentions it he will be attacked for doing so.  He will be called an “Islamophobe” and a “racist”.  He will be upbraided for failing to understand that Islam is a Religion of Peace™and that murderers in its name have “misunderstood” or  “hijacked” this peaceable religion, or that he’s taken out of “context” the theology and jurisprudence that enables the killing of one’s children for wanting to be “western”….
In short, the Judge did not want the hassle and stuck to the euphemisms: “social and cultural attitudes”.
But how are we to reduce the increasing number of “honour killings” in the west if we are willfully blind to the root cause of them – Islamic theology  and jurisprudence.
For the plain fact is that  it is not despite Islam, but because of Islam that her parents killed Shafilea.
That fact that it’s not comfortable to address the issue is not enough reason to ignore it.  What is needed is (i) knowledge of the issue and (ii) courage to speak that knowledge.
Somewhere, somehow, someone, needs to show both the knowledge and the courage to speak the truth of Islamic honour killings.  For it needs to be brought out into the open: surely most of all by those millions of “moderate Muslims” we’re constantly told are the majority of Islam.
It’s up to them to face squarely to true cause of Islamic Filicide. The doctrines and jurisprudence of the religion of peace.