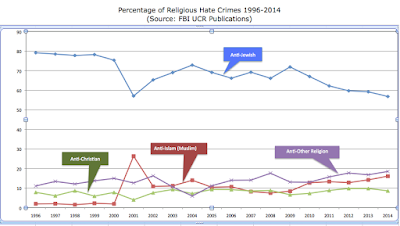 The above chart is a screenshot from my Excel spreadsheet, in which I've gathered all the most reliable data on hate crimes in the US, from the FBI Uniform Crime Reports. [1]
The clear message from the chart is that religious hate crimes in the US are overwhelmingly anti-Jewish, that is to say, anti-Semitic.  They are not anti-Muslim, even after 9/11, though there was a slight peak (remarkably slight, all things considered) after that atrocity. [2]
I post this, because there's a full-court press from the Obama Administration, from Obama, to his Attorney General and head of Homeland Security, to say that we must not give in to hatred against Muslims.  But the record shows that the US has been remarkably tolerant of Muslims (though not so much of Jews).  The concept of "backlash" is balderdash.
Rather, why don't Obama & Co concentrate on saying something along the following lines:


"We know that the majority of Muslims are fine and peaceable folk.  But there's clearly something in the doctrines of Islam that motivate some Muslims ('an extremely small minority', if you wish), to murder their fellow citizens.  We urge all you fine and peaceable Muslims to address this issue, to lead to a more moderate and secular Islam, so that all Muslims can live in peace in our secular society.

Practice your religion, by all means.  You may practice it freely and safely in the US.  But practice it also in private ('without attempting to impose your religion on the rest of us, on pain of death' ... if you wish).

But no, Obama & Co lazily lean low to link with the canard of a horrid "backlash against Muslims".