Say something nasty about immigration? Off to jail with thee! 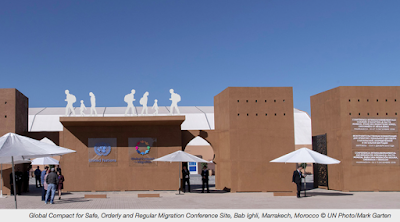 So on the same day that there's a historic Brexit vote in the British Commons, December 11, there's an equally -- maybe even more -- consequential vote happening in Marakeesh. This vote will be a UN attempt to criminalise any criticism of migration. Get that. Criticism of migration!
Bear in mind that if you're for immigration, or against it, or -- as most people -- somewhere in between, believing that controlled immigration is the thing, there are studies showing that immigration harms the working class and studies showing that immigration causes no harm at all and only good.
In other words: it's a topic of debate and discussion.
But not if the UN has its way.
No doubt pushed by the biggest block in the UN: the Organisation of Islamic Congress.
If the United Nations has its way, if the OIC has its way, it will no longer be even legal to voice your concerns about immigration.