Hong Kong protests: from throwing bricks at police vans to becoming experts at putting out tear gas, meet the teenagers who are risking it all for their ideals 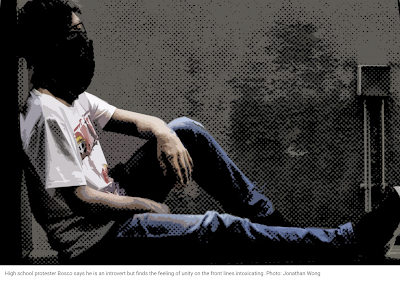 Some think that this article romanticises the Young Ones protesting on the front lines. Others think that it’s useful to know what’s on their minds....


Their yearnings, as revealed on social media, imagine a Hong Kong where people speak Cantonese, patronise family-run shops and not chain stores and pharmacies catering to mainland Chinese tourists, and care for one another as neighbours in close-knit communities. Maps and guides online provide a list of “yellow” restaurants and stores – the colour symbolising democracy in Hong Kong – that protesters should support.

My view: this strikes me as outright nativist.  If something similar were said in the UK, or Australia, or the US, you would be hammered for being xenophobic, bigoted, racist. As was John Cleese when he said that “London is no longer English”.  Here it’s “Hong Kong is no longer Cantonese”.  We don’t have ethnic difference between Hongkongers and mainlanders, and yet locals have grown to hate their mainland cousins, because they’re here, not there, and they’re buying up milk powder and cutting queues.
And in the west that’s praised as fighting for “Freedom” and “Democracy”. Yay!


Almost two-fifths of the 12,231 protesters cumulatively polled in 19 protests from June to August were younger than 24 and about 11.8 per cent of them were 19 or below....

As of October 21, around 35 per cent of the 2,671 arrested protesters are students, according to figures obtained by the Post from police. One in eight arrestees – or nearly 360 – are high school students. Around 140 of them are below 16, with the youngest being just 12 years old. A total of 232 people have been charged with rioting, an offence punishable by 10 years in prison. Chief Secretary Matthew Cheung Kin-chung described an earlier set of figures released as “shocking and heartbreaking”....

So, as we know, they’re very young, and younger even than most other demos around the world.  Many just school kids.  Which begs the obvious question: how much do they know of the issues.  And the answer is; about Hong Kong before handover, nothing. About China: almost nothing, for very few of them have even visited China.
And we know, they think it’s fun:


But the increasingly dangerous stand-offs with police have sometimes also been thrilling, they admitted, giving their weekend protests an almost addictive quality.
Henry, a fit athlete, gave a sheepish smile as he recalled how he felt he was in a “Korean drama” when he had to sweep a female teammate into his arms and rescue her from smouldering tear gas.
For Bosco, who described himself as an introvert, the feeling of unity on the front lines is intoxicating. No one from his school or family would have thought he would be a hard core protester, he said.
“In a group, we hurl bricks together,” he said. “Wouldn’t you be happy if you get to hit a police van?”


But it was also easy for adults to dismiss them as young, foolish or being manipulated by other adults, a tendency common in movements worldwide.

Well, they are young!  Foolish? Well, who aren’t we all foolish, to some extent, when this young?. Manipulated by adults? The Pan-Dems are around always, spurring on. So, yes, I’d say that it’s true, if not dismissive.... We should not, as responsible adults, be letting the future of our fine city be decided by kids as young as 12.
- October 23, 2019