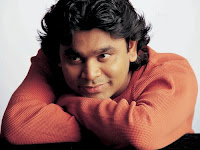 This is Allah Rakha Rahman (aka A. R. Rahman, née Dileep Kumar), a "huge star in his native India", we are told.  Rahman converted to Islam when he was 23.  I always wonder about that: why do people convert to Islam, if they read the basic texts, the Koran, the Hadith and the Sirah (the Muslim official account of life of Muhammad)?  I wonder how they can reconcile the incessant violent, sectarian, supremacist statements in that fundamental doctrine, with the concept of living in peace and harmony with one's fellow man.  Ahh.. but then he's a Sufi.  All is explained.
Sufism is the mystical sect of Islam, one which focusses on the development of one's inner spiritual self.  Indeed, such is its metaphysical and spiritual nature that it is often derided by Sunni and Shia Muslim, and is said to be non-Islamic by many Muslim scholars.  But Sunnis and Shias (nearly all Muslims) need not worry, Sufism is not about to take over any time soon: there only 1-2 million worldwide, of a Muslim population of 1.2 to 1.5 billion (i.e. about 0.07 to 0.08% of the total).
His Sufism may explain why Rahman's grip on mainstream Islamic doctrine is shaky to say the least.
On the issue of Islam and music:

What does he [Rahman] say to the Muslims who say that Islam forbids music?

"In that case why is the azan [the call to prayer] in tune?" he asks. "Why is it musical? Islam has been hijacked by the extremists and what drives me in my own work is to create music that will bring people together."

Rahman may well believe this to be true: that Islam has been "hijacked by extremists" in calling for the banning of music.  Or he may fervently wish this to be so.  In either case, he is mistaken.

The Umdat al-Salik, the Classic Manual of Islamic Law, which "represents the orthodox Muslim intellectual and spirtual heritage that has been the strength of the [Muslim] community for over a thousand years" [p. viii] and is certified as authoritative by both the International Institute of Islamic Thought and the Al-Azhar University of Cairo (the oldest seat of Islamic learning and the recognised arbiter of Islamic thought and doctrine), has this to say about music:


r 40.1-3:  (1)  Allah Mighty and Majestic sent me [Muhammad] as a guidance and mercy to belivers and commanded me to do away with musical instruments, flutes, strings, crufixes, and the affair of the pre-Islamic period of ignorance.

(2)  On the Day of Resurrection, Allah will pour molten lead into the ears of whoever sits listening to a songstress.

(3)  Song makes hypocrisy grow in the heart as water does herbage.

Why otherwise did the Somali "government" recently ban music?  Just following the orders of Muhammad, the "perfect man".

But Rahman knows nothing of this, or chooses to hide it.  Or perhaps he already has "herbage" in the ears.  In short: a fool or a knave.


"At one of my concerts you will see people of all colours and religions together. That is what music can do. A song is more powerful than 1,000 rallies."

*****************
Postscript: I  wonder about converts to Islam, as opposed to not wondering about those born into Islam.  The latter -- poor, benighted souls -- have no choice, and are born into a religion which discourages apostasy with social ostracism at best and death at worst.  They may decide to live their lives peaceably -- indeed most do, witness for example Indonesia, Malaysia -- by ignoring the tenets of Islam, not being particularly pious, or simply living in happy ignorance of the command of Islam's basic doctrine to proselytize Islam, even unto the sword.  In short, it's understandable why people born Muslim stay Muslim and why most are nice decent folk getting on with their lives.  But converting?  That's a positive choice you make as an adult and I would have thought one would check out the entry requirements pretty carefully before joining.  If you do that -- as I have done -- you can't help but be struck -- as by a two by four plank of walnut -- by its irredeemably, incessantly violent sectarianism, by its supremacist, anti-semitic and intolerant nature.  So, what gives?  Do the converts not read this stuff, the basic texts and canons of this baleful "religion"?  Or do they read it and think "yeah, that's for me!"?
- April 18, 2010