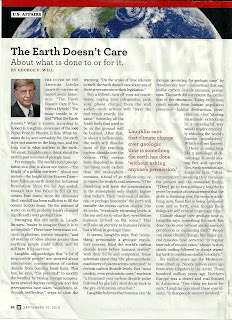 I just wanted to get this article posted.
click to enlarge

The online copy is here and is full of comments taking issue with Will and Laughlin, just in case you feel the need to get indignant: plenty of others have done it for you.....
- September 30, 2010

[Why are only two of the five on the left in the sights in African American women graduates?  And why is that not commented on?]
I recently noted an interesting (and somewhat depressing) article about the extent to which the U.S. is still a profoundly segregated society.
This morning the BBC World Service ran an Assignment piece from the United States, about the difficulty many graduate African-American women were having in finding spouses.  Black men, that is.  It was assumed, indeed stated by several of the interviewees without a blush (...), that what they were looking for was "an educated Black man".
Surely this is outright racist.  Of the sort, however, that is totally accepted and not even noted by interviewers.
(Yet another) letter to the Beebs:

The Times Square bomber "distorted" Islam. Or DID he?

See that doover on the left?  It's a distortion device.  It takes music in one end and sends it out the other in distorted form.  Good for music.  Bad for religion. A distorted view of religion can lead people to do crazy things, like set bombs in Times Square hoping they will kill the maximum number of men, women and children.  Islam's a Religion of Peace, so of course anyone wanting to do such a thing must be "distorting" Islam.  Right?  At least that's the view of the BBC reporter, covering the story of Faisal Shahzad, the so-called "Times Square Bomber" who comes up for sentencing.  She said, in her report, that he had "distorted" Islam.
Letter to the BBC World Service:

Is Obama a Muslim? Of course not. Aaah… 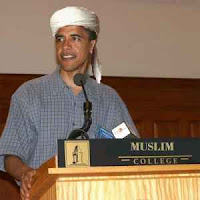 My wife sometimes opines that I’m something of an Everyman. If she wants to know who will win an election, or what people think of a book, a movie, whatever, she asks me and I’ll reliably get the majority opinion right.  A less kindly view of “Everyman” might be to allow that I’m rather more like a pillow: bearing the indentation from the last metaphorical head to lie on me…
Apparently 18% of Americans think that Obama is a Muslim, up 11% from a year ago [Article below].  What are we to make of this?  Is it really true that nearly one in five Americans think that he’s an adherent of the Religion of Peace?  Can they be that ignorant?
Read more »
- September 30, 2010 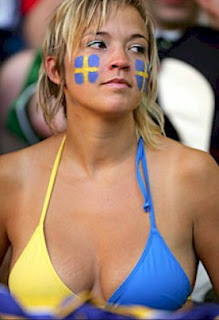 Letter to the International Herald Tribune (the New York Times overseas):
Your editorial (“Even Sweden”, IHT, 29 September) puts all the onus of integration of Muslim immigrants to Sweden on the Swedish state and none on the new arrivals to learn the language and get a job.  You excoriate the so-called racism and xenophobia of those who wish to control that immigration seemingly with no understanding of its pressures and challenges.  The Swedish Minister of Integration, Nyamko Sabuni – a Muslim who came to Sweden when she was 12 –  insists  that "it is crucial that immigrants get in contact with the labour market as soon as possible after receiving their residence permit. This has to be combined with language courses."  Is Sabuni an Islamophobe?

In the Shade of the Koran**. On Pastor Terry Jones

Has anyone noticed that Pastor Terry Jones (left) – the fellow who ignited a global firestorm, though not, in the end, a book –  looks uncannily like Terry Jones of the Monty Python Flying Circus?  You haven’t?
Well, I guess that’s because in fact he doesn’t look like Terry Jones at all.  When I got back to Googledom I found that he looks creepily, not like Terry, but like Graham Chapman, the late lamented Python.  Now that’s perhaps even more creepy Darlings, as Dame Edna would say, if she took an interest in the Koran, which I’m sure she doesn’t, is that Chapman played the part of Brian in the  “Life of Brian”, which of course mocked religious belief.
I was in the UK when “The Life of Brian” first came out and I remember the upset it caused some Christians.   There were even protests outside theatres.  But what happened?
Read more »
- September 29, 2010 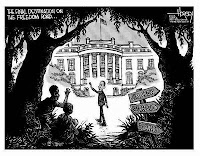 I found this article in The Spectator of 25 September interesting and rather depressing.  Despite all the effort, all the good will (and ill will, too, of course), in spite of all the laws and all the political capital and all the caring, the compassionate, the colossal human effort, despite all the talk, the huff, the babble, the fury the soaring oratory, despite all this: America remains a profoundly segregated society.   Obama went to the White House, and black America is no better off.
You certainly see this segregation in visits to the US, though you might not notice –  especially if you don’t want to –  and if you stick to the nicely mixed spots, like Manhattan or Venice Beach in California.
But even in Manhattan or Venice Beach, it’s oil and water, rather than vinaigrette, or, in the words of the penultimate para below,
“As the black British writer Lindsay Johns said of New York, it’s more of a fruit salad than a melting pot.”
Read more »
- September 28, 2010

"Learning from one Another"

A report from the United States that the Lone Star State has rejected “Pro-Islam” textbooks being used in its schools. (text below)

This brought to mind the case in Australia of the new curriculum “resource” called “Learning from One Another” (LFAO).  According to its sponsor, the Australian Curriculum Studies Association, LFAO is “a new resource providing information, practical advice, and classroom strategies for teachers in all Australian Schools.”
Can’t be anything wrong with that, can there?  Learning about other cultures, understanding the diversity and perspectives of Muslim Australians, to make us a more tolerant, more just society, and so on.  Welllll.....
Read more »
- September 27, 2010

BHP's taxing time: bouquets and brickbat for the "big Aussie" 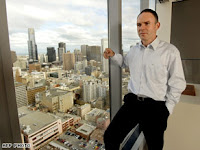 The Australian gets a pretty bad wrap from the left – “tool of the arch-conservative Murdoch” and the like.  But it does offier differing views on its opinion pages, from left and right,  and here’s an example from The Weekend Australian 18-19 September.  On one side Matthew Stevens reports in generally favourable terms, on the proposals of Marius Kloppers’s, CEO of Australian’s BHP – the worlds’ largest mining company –for an Australia-wide carbon tax.  On the same pages, Terry McCarnn tears Kloppers apart and calls him “silly”.   Some clips below.
[photo above of Kloppers in BHP HQ, Melbourne Australia.  I’ve sat in this office with a previous CEO, talking about BHP and China business – back in the eighties, when it was all new].

I head off to various battles, sending a telegraphic transfer to the UK to cover guardianship for the son at boarding school, then to oversee boat repairs, and "battle" the lady at the Shroff's office to get my parking ticket back; and think of the other "battle", the real battle, the one that the wonderful Christopher Hitchens has -- against esophageal cancer.  What are my "battles" compared to his?
But as he says it's not "battling" cancer, the poison that goes into his veins as part of chemotherapy is a "bore", no battle there.   "You feel as though you're drowning in powerlessness", in the process of chemo, he says.

"China advancing at an 'astonishing' pace on green technology"

"My life as a Middle-Eastern American", by Porochista Khakpour

I’ve never quite understood the American penchant for hyphenating their people: “Italian-Americans”, “Irish-Americans” and the like.  We never did it in Australia.  The closest we came, when I was a kid, was to call immigrants “New Australians”, a phrase that in time became non-PC, though I’m not quite sure why; surely it’s just a bit cute.
Now the hyphen-American comes back to bite Ms Porochista Khakpour (see below).  She says it , the hyphen, nowadays no longer “gracefully declares” her two worlds; rather, it “feels like a dagger”.
It’s not her fault that America has this strange predilection to hyphenate its people; but nor should she blame fellow Americans, be-hyphenated or not, for having concern about those from the middle east. After all, just have a look at the countries there, from Egypt to Turkey, from Iran to Yemen, nary a one well disposed to the Great Satan.** And if not all of the Middle-eastern-Americans are ill-disposed to the US or wish it harm – as surely they don’t -- how does one tell?
Read more »
- September 14, 2010

Cathophobes on the march -- they have KKK helmets even, bigots they must be... 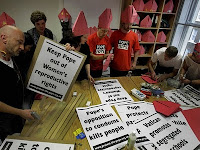 In contrast [to Pope John Paul II’s visit in 1982], for this papal visit, a group called Protest the Pope has lined up gay, feminist and secular groups to stage protests against the visit - and there has even been talk of serving the pope with an arrest warrant because of the abuse scandal. [That’s them above]

Why are these folk not excoriated as being “Cathophobic”?
Read more »
- September 14, 2010

"Is this America?" asks Kristof, bending to Taliban will

Kristof is another reliable dhimmi writing in the New York Times, reliably misinformed and misinforming.  The man has some intelligence to be writing in the “paper of record”, the NYT, but he clearly has not read any of the basic Islamic doctrine, or if he has, he has signally failed to understand it.
In this piece, he’s confused as well: asks for more criticism of aspects of Islam, then says “shame on you” to those who do criticise Islam.
Take these two contradictory paras:
Read more »
- September 14, 2010 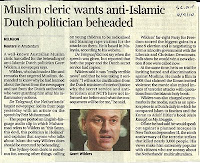 Well, if Feiz Muhammad wanted to behead Geert Wilders because of Wilders’ outlandish bouffant hairstyle, I could understand that.  Bouffant bigotry, fair enough.  But for the “sin” of pointing out the obvious?  I think not.
Note that the “cleric” Feiz Muhammad, an “aussie” apparently, has also called for young children to be radicalised and blames women for their own rape.  The wonderful weave and woof of our muslim multicultural quilt.

"Building on Faith", the Slippery Sheik on Islam and peace

Again, the furphy that “Islam” means “Peace”.  It doesn’t.  It means “submission”.  More duplicity from the slippery-smooth pabulum of Rauf.

The very word “islam” comes from a word cognate to shalom, which means peace in Hebrew. The Koran declares in its 36th chapter, regarded by the Prophet Muhammad as the heart of the Koran, in a verse deemed the heart of this chapter, “Peace is a word spoken from a merciful Lord.”