When ‘white supremacists’ aren’t even white 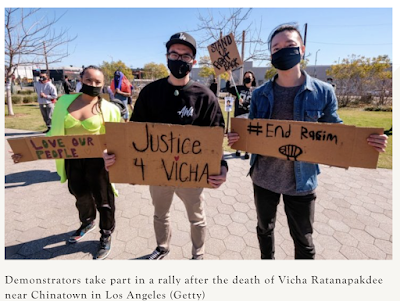 Almost all the suspects in recent high-profile attacks against Asian Americans are from minority groups. Here

I guess I signal my "White Fragility" by even posting this. Information on what's actually happening in these attacks. But; stubborn things, facts.

But may not even be because of race hatred:

We don’t know how many of the attacks are even motivated by ethnic hatred to begin with. Yahya Muslim, an African-American man who is the center of one of the highest-profile attacks on Asian Americans, is reportedly homeless and mentally ill and prosecutors have yet to bring hate crime charges against him.

Over the past year, we’ve seen a huge spike in violent crime, particularly shootings and homicides. It’s possible that these crimes against Asian Americans are simply part of a larger crime wave that is making major American cities increasingly unsafe.

Some of these crimes, however, involved explicit invocations of anti-Asian hatred. One Seattle court filing from January I reviewed described Samuel Green shoving Asian American Kathyrn Yeager ‘so hard it knocked the wind out of her’ while saying ‘Asians need to be put in [their] place.’ Again, Green is not a white supremacist. He is black.

It’s hard to know Green’s exact motivations, but we know that for years, Asians have been stereotyped as greedy entrepreneurs and interlopers for owning and operate businesses in inner-city communities. This stereotyping has created resentment that sometimes explodes into violence.

Zaid Jilani has an interesting thread on Twitter that will be interesting today and for about a few minutes after, then forgotten: about the sacking of a poor old janitor falsely accused of molestation by a young black student, trans issues, Biden's strikes on Syria, etc....
- February 26, 2021

That's the message in ASCII computer code "hidden" in the parachute that brought the Perseverance Rover down to Mars surface last week.

The origins of the phrase are an 1899 speech by Theodore Roosevelt, in which he said

"Far better it is to dare mighty things, to win glorious triumphs, even though checkered by failure, than to take rank with those poor spirits who neither enjoy much nor suffer much, because they live in the gray twilight that knows not victory nor defeat." 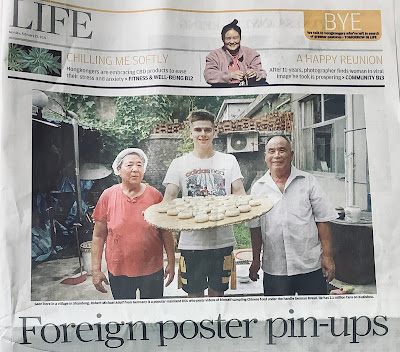 Reminds me of my time in China back in the late eighties, in Shanghai, when I was producing plays and entertaining local artists at boozy parties back my place. Speaking Chinese helps, for sure.

Here are some doing stuff to make China more aware of the west and vice versa. Rather good thing to do in these polarised times, I reckon.  The online comments are rather harsh and make them all out to be tools of propaganda. Some maybe. Most, I'm guessing, not. Just interested in China and taking advantage of their foreignness, their being "lao wai" (老外).

One weird thing: the main pic in the print version is above, but doesn't appear in the online version. Why? Did they have some blowback on his name ending in the memorable "Adolf"?

When Antoine Bunel first posted about cooking on China’s Twitter-like microblogging site Weibo in 2015, he didn’t think his use of Chinese social media tools would lead to a full-time job as a key opinion leader (KOL).
Calling himself the French KOL who is the most familiar with the China market, he has amassed over a million fans through his cooking videos and recipes in Mandarin on Weibo, video platforms Douyin and Bilibili, cooking app Xiachufang, and other channels.
The former marketing professional is one of a rising number of foreign sinologist KOLs in China whose popularity rivals or even eclipses the reach of local influencers.

Targeting Chinese audiences, they use local video platforms to establish the persona of a laowai (foreigner) well-versed in Chinese culture. Some share tips on cooking; others use their digital platforms to teach or promote cultural exchanges.

An interesting bit of Lifestyle. Worth a read.

For myself: colour me skeptical.

The WHO-led delegation went to China to investigate the origin of SARS-CoV-2.

What did they find? Nothing new, really. Most likely came from an animal; but we don't know which one. "Extremely unlikely" it was a laboratory leak (but not "dismissed"); maybe came from somewhere else (US, anyone?). But overall "we have more work to do".

Many people -- and not just Trump cultists -- were wondering what they'd say about the hypothesis that the virus escaped from a lab in Wuhan. Important to note here that this hypothesis is not that it was manufactured, genetically manipulated in the lab. Rather, it's that it was being studied in the lab, and escaped somehow, perhaps by a staff member becoming infected. Here's some knowledgeable thoughts on it from Bret and Heather.

What the WHO had to say about his hypothesis is that it was "extremely unlikely". Remember, though, that on 14 January 2020, the WHO said, in a tweet, that "there is no evidence the virus can be transmitted between humans". For which give a grade of F.

My own take on this is not that it is a "theory", or still less that it is a "conspiracy theory". But that it is a hypothesis, and has not been falsified. China denying the lab leak is not debunking it (as many seem to have been convinced by). Failure to prove it is not to disprove it.

My own thinking being: no, it's highly unlikely that they've been given that access. Why? Because of China's record in covering up data and whistleblowers at the outset of the outbreak, and its increasing muzzling of anything outside the Beijing narrative, under the cruel despotism of Emperor Winnie-the-Pooh Xi.

The team itself confirmed my suspicion: they said "we were not equipped to make a forensic investigation into the Wuhan lab". That's a kind of mind-blowing admission. Not carried anywhere, of course; you had to search for it. Imagine: one of the main possible sources of the virus -- a leak from a lab -- and the team sent in to look for the source is not equipped to look at the main possible source.

That the Wuhan Lab leak is not crazy conspiracy is underlined by Dr Shi Zhengli, director of the Centre of Emerging Infectious Diseases at the WIV, who is said to have rushed back to Wuhan on hearing of the new coronavirus, worried that it may have come from a leak by her lab. If such a thing were impossible -- as those saying this is just a conspiracy theory suggest -- then why was Dr Shi so worried?

In any case, since that time, increasing numbers of experts have become convinced that the Lab Leak Hypothesis is at least a possibility.

Even the WHO admits as much, as its most recent announcement, yesterday, is to confirm that they have not ruled out any possibility.

Also: see CNN quiz Peter Daszak of the WHO and the Cold-Chain theory. And the DarkHorse take on it. (“The Cold-chain hypothesis” is that the virus was brought to Wuhan via frozen foods). Daszak has interests in “gain-of-function” research, the type of research that is suspected in the lab leak hypothesis. He has an interest to downplay the lab leak hypothesis; in short, conflict of interest. Thus, the sum of what has happened is that the WHO asked the Chinese if there had been a leak from the WIV, China said "no" and that was taken as evidence of the fact that it hadn't happened. And in turn the Chinese have put forward an idea that the virus was spread via cold-chain transmission, for which there is no evidence anywhere else in the world, and indeed even in China itself. And this hypothesis is being touted by Daszak. So, sure, let's keep it on the list of possibilities. But also the lab-leak hypothesis. More here.

Alex Lo's take on the pathology of youth riots here in 2019. Interesting, though I don't entirely agree with his take on who is projecting what. As I say at the site:

What about if one is "…a critic of the Hong Kong government, our pro-establishment society and the central government…" [Lo's words], yet at the same time critical of the senseless and counterproductive violence of the youth riots in 2019? Doesn't that make you kind of rational?

Claiming they are a "lost generation" is no excuse for their naïveté, still less for their violence. Which led directly, let's be clear, to the National Security Law and its draconian results.

BTW why shouldn't we be for "stability, law & order, and prosperity"? Why should that be so reviled?


My cross-linguistic pun. “Niu” is the Mandarin pinyin pronunciation of the character:
牛
sounds like “new” and means “Ox”, this our Chinese New Year. So: “Happy Niu Year”!

It beings to mind one of the advantages of China’s pictographic language, over an alphabetic one: everyone can recognise the character and know it means “Ox”, no matter how they pronounce it.

Here: An answer to the question "Why does China remain one of the few countries not to transfer to an alphabet-system of writing".

[Me: to which I would add: that it helps memorise. I can more easily recall poetry in Chinese than in English. And that's for someone who learnt Chinese as an adult. If that's the case for me, it must even more be the case for native speakers]

Also: the answer below is not the one I was looking for which highlighted the unifying effect of Chinese characters on Qin-dynasty China. Every character was recognised for its meaning, whatever the pronunciation of it.

Just now, on bike ride. Plenty of people out and about for Chinese New Year…

Email ThisBlogThis!Share to TwitterShare to FacebookShare to Pinterest
Labels: Photos

It’s been months since we had rain here in Hong Kong. The football pitch in our park has been grey, bare and hard. Souther China is in “severe drought”. Winter is usually dry in this part of the world, but not this dry.

Email ThisBlogThis!Share to TwitterShare to FacebookShare to Pinterest
Labels: Gardens and Flowers, miscellanea

Email ThisBlogThis!Share to TwitterShare to FacebookShare to Pinterest
Labels: Photos 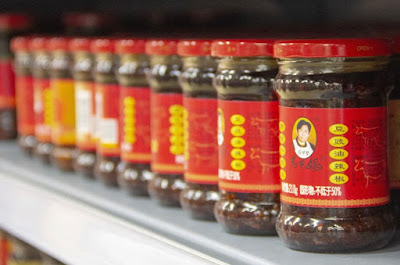 In these troubled, sickly times we need something powerful and chilly and crunchy and plain delicious to ward off the doldrums. And that’s Godmother Tan’s Guizhou chilly paste.

Whipped up by a then impoverished widow, Tan Huibin in the 90s to go with her street food noodles, it became famous as she donated meals, poor as she was, to the even poorer.  Hence the name “Od Godmother” sauce, Lao Gan Ma, 老干妈. The Post has a story.

[Online, at least for Hong Kong, it’s at Aeoncity.com.hk]

Anatomy of a New Yorker cartoon 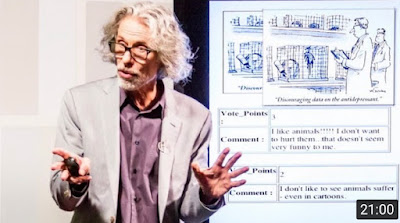 Email ThisBlogThis!Share to TwitterShare to FacebookShare to Pinterest
Labels: Humour 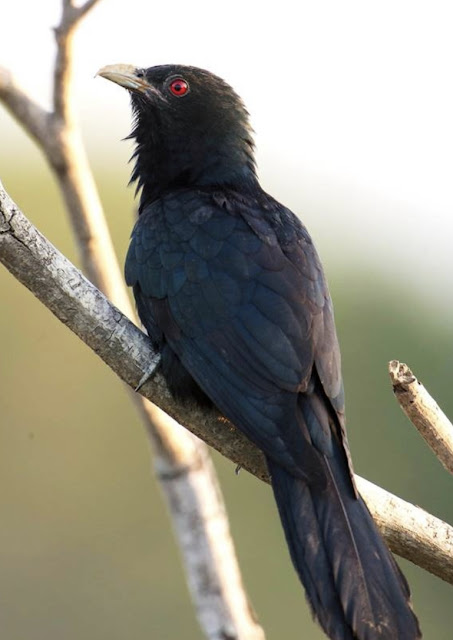 Today.
Last year, I thought it was early too, and it was Super Bowl Monday, our time. February 13.

This year even earlier. His — and it’s always “his” — plaintive, rising, desperate plea ringing out from high in the trees. Rarely seen. Always heard.