Ahmadiyya and the "myths" of Islam 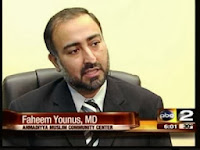 He endeavours to show Islam as a religion of "love for all, hatred for none".
That's a simple and inspiring motto.
Trouble is, most Muslims consider Ahmadi's heretics.
Consider the following report, in the Catholic Herald:


I visited Shia and Ahmadi Muslims living in displacement camps after they had fled their villages following brutal attacks. The Ahmadiyya community, whose motto is “Love for all, Hatred for none”, consider themselves Muslim, but are regarded as heretical by many others. I went to Ahmadi mosques which had been forcibly closed, in one instance sealed with 20 Ahmadis still inside


However, in many Islamic countries the Ahmadis have been defined as heretics and non-Muslim and subjected to persecution and often systematic oppression.

Ahmadis form only 0.5% to 1.2% of Muslims.  So, while we wish them well in their task of pacifiying a doctrinally military religion, they are pushing it uphill if they think they can counter the Sunni dominated narrative of Islam: that its main task is to bring the word of Allah to the world.
- October 15, 2013