Terrorist organisations: Islam is top of the pops

In 2010 I put together an excel sheet of all the officially designated terrorist organisations in the world and calculated how many were Islamic.  At that time it was 98%.
In August 2015 I updated the sheet and these were the headline figures:
I've just done another update and the headline figures are:
Here's a clip of the summary of the latest figures: 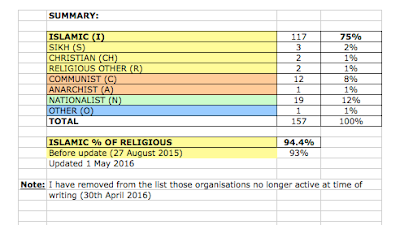 At the risk of belabouring the obvious, a few observations:
My spreadsheet is here on Dropbox.
- April 30, 2016