Courtesy Pamela Hewitt of the (restricted) "Foreign students in China 1973-79" Facebook site, comes link to a story by Mark Raffaele, the first foreign correspondent in China post revolution: "Reporting on China 40 years ago".
On the far left of the photo is Stephen FitzGerald, Australia's first Ambassador to China, who had been appointed in January of that year (1973).  I worked with Steve in the Embassy for a bit in 1976, just before he left, and had a phenomenally fun farewell party at the Ming Tombs: an open air picnic of singing, dancing, wining and dining.   I then worked with him as a partner in his consulting company, Stephen FitzGerald and Company, from 1983 to 1990.  These were some of the funnest times of my life! Opening up China for Australian business in the "early days".
Raffaele's description of entering China in the early 70s was exactly as I experienced it in 1976.
Gough Whitlam was notoriously deposed from government in 1975.  He visited China again, with wife Margaret in 1976, shortly before I arrived.  They were in Tianjin, close to epicentre of the major earthquake in Tangshan, which killed 250,000.   Nicholson penned an (in)famous cartoon for The Australian: 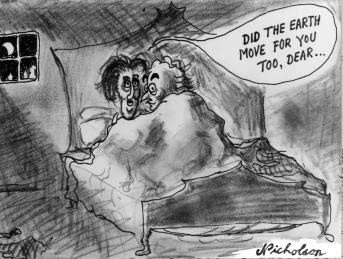 A lot of people were upset by the cartoon, but Whitlam, by then safe in Japan, telegrammed Nicholson and asked for the original!
I looked after Gough when he was in China again around 1980.  He was one of the more difficult people to interpret for -- he wouldn't stop talking to give the interpreter (me) time to translate his booming, and often grand, thoughts....
- November 04, 2013