Hunt Elephants to Save Them? Some Countries See No Other Choice (or print edition: "...? An endless debate”) 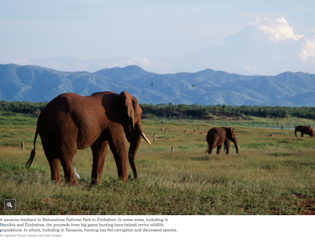 This is an interesting and I think pretty balanced article in today's New York Times, International Edition.
Just to be clear: I'm certainly not pushing trophy hunting. I'm now neutral about it. I wouldn't do it myself, and can't imagine why people do. But they do, and that helps some conservation. But, as the print version of the headline above says, it is "An endless debate".

As the article points out, trophy hunting is handled well in Namibia and Zimbabwe; not so well in Tanzania.
The International Union for the Conservation of Nature is in favour of it; other Wildlife bodies against.
Whether you're for or against, the main issue remains poaching and trafficking. Trophy hunting is only 0.01% to 0.23% of the total killings. And still brings in up to 20% of revenue for some countries (figures in the article).
From the end of the article:

"We're talking about the wrong thing right now," said Dan Ashe, president of the Association of Zoos and Aquariums and former director of the Fish and Wildlife Service.

"Trophy hunting is not the issue. We should be focused on wildlife trafficking and the broader plight of elephants."

And it's certainly not the clear-cut evil issue that Avaaz would have us believe, with its breathlessly hyperbolic petition.
You can read the article online here.  Or archived here,  Or here in pdf.
It's worth a read, very interesting.
- December 12, 2017