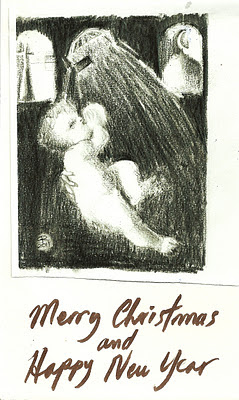 [Postscript: this post was linked at BCF, and one comment was: "now, if he had drawn Muhammad in the Manger"...]

I got the card at left from an old school mate of mine, a fine fellow I've known and loved for near on 50 years now, and for those many years an artist and teacher in Australia.

He makes his own Christmas cards each year, always a little original wood-block print, always thoughtful, simple, elegant.
But I must say, this one got me thinking: it's provocative and ambiguous.

Is the message (a) that we're all one folk, all humans, all love our babes; that -- with the church and mosque in the background -- all religions are the same? Or is it (b) a satirical take on Muslims' claim to Jesus as the "first Muslim", Jesus as a "prophet" of Islam?

I suspect it's the former, but would rather like to know from my mate, in case it's the latter.

So I wrote him a letter in response (he doesn't really do email), the first draft of which I showed my son who said it was a bit "preachy", which I agreed it was.

So I just sent him a simpler one and simply questioning "what's the message?"-- assuming, that is, that it's ok to question an artist on the meaning of his art.  Isn't the standard artist's response supposed to be that you take the piece on its own terms and make up your own mind about it?

In any case, I find this card has certainly got me thinking, and that's also one of the aims of artists, is it not? [And if the aim really is point (a), maybe then I can get "preachy".  After all, that's one of aims of we counter-jihadis, isn't it: to enlighten our friends on Islam!...].

Got your card yesterday and it’s sure provocative!  I’m also wondering about its meaning.
Is the message (A) that we're all one folk, all caring humans?  That despite this woman (if indeed it is a woman; you can’t really tell, can you?) being in a body bag [*], she still cares for, still nurtures her babe.  That -- with the church and mosque in the background -- all religions are the same?
And then the Babe: is it baby Jesus?  It looks a lot like the small Da Vinci painting we saw in the Hermitage in June last year; indeed surely it takes its inspiration from it, for there's no other similar "Madonna and Child" that I can find:

Of course, Islam’s claim of Jesus being the “first Muslim” is consistent with Muhammad’s plagiarism of much of Judaic and Christian doctrine at the time, half-understood and partly-digested as his “understanding” of it was.  But, to Muslims, Jesus is not divine; he was just a person, albeit a “prophet” (of Islam!), and Christianity’s claim of Jesus as one of the Trinity is blasphemy to a pious Muslim.  Hence, pious Muslims not only don’t celebrate Christmas, but also say that Muslims should not even congratulate those who do celebrate it, since the birth of Christ, as a deity, is “shirk”, the association of others with the One God, Allah, and is “the worst of crimes”. So maybe your message is (B) a satirical take on Muslims' claim to Jesus as the "first Muslim", Jesus as a "prophet" of Islam?
So, in all, a very provocative and thought-provoking card at this time of Christianity’s most important festival, (itself of course plagiarised from earlier pagan celebrations. Then again, it's been appropriated to rather more peaceable outcomes….)
BTW:  I came across this photo of you [not included here]... at Amalfi, July 2005.  Just at the time, I now recall, that the above body-bag person’s co-religionists showed their love of tolerance and diversity in the UK by bombing and murdering their fellow citizens.
I’ve been sailing and driving through Africa this year.  Not sure what’s on next year, but would love to see you, you and family, here in Hongkers.  If you’d like to see my blogs on the travels, let me know and I’ll send you the links.
I remain an atheist, but now term myself a "Judaeo-Christian Atheist": in that our culture and civilisation, its reformation and enlightenment – its tolerance of we atheists -- are grounded in those two Abrahamic faiths, and not at all on the other allegedly Abrahamic faith.
So.. as a Judaeo-Christian Atheist, I wish you a very Merry Christmas!
(And hope you keep me on your Christmas Card list, after this bit of a rant…)
...
Cheers, ...
PF


[*] PS: “body bag person”: bit rude innit?  Well, consider the Da Vinci painting above: the love of the Virgin for her Babe shines from her face.  It's important that we see her face.
But what is the person in the body bag thinking?  Given that leaders of Hamas have said babies are viable tools in suicide bombing??  What’s s/he thinking?  Is it love of child?  Or hatred of infidels? One can't tell. There are many good reasons to revile the burka.  Many free-thinking Muslim women revile it.  Just one of the reasons is security; seeing the face; judging.
[Click on "Burka" at the left under "Labels" to see other posts on it]
- December 20, 2011