Faiza Patel works at the Brennan Centre for Justice which is part of the New York University. She recently had an Op-Ed piece in the New York Times that caught my attention.  Mainly because she dowplayed the Islamist intent of a couple of major Islamic organisations in the US: specifically the Islamic Circle of North America and CAIR, the Council on American Islamic Relations.
As I looked through the article, at the Brennan site, I found other statements one should not expect from a senior research analyst at a prestigious New York think tank.
So, I go through her article, copied and pasted below the fold.
It's called "A 'Commission on Radical Islam' Could Lead to a New McCarthy Era" at the Brennan site.
My comments are indented and in italics, based on the Brennan version, after the fold.
Cross-posted on The New York Times.

The president-elect’s suggestions during his campaign to ban Muslims from entering the country and to possibly establish a registry of Muslims have stirred fears about religious discrimination.
But a more easily realized and less publicized proposal by Donald J. Trump may also threaten civil liberties. That is a Commission on Radical Islam, which his campaign website says would “identify and explain to the American public the core convictions and beliefs of radical Islam, to identify the warning signs of radicalization, and to expose the networks in our society that support radicalization.” As hate crimes against American Muslims soar, such a commission could further incite distrust and undermine Muslim leaders and civil society. 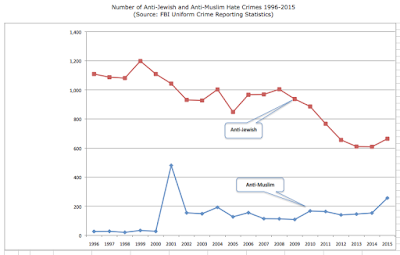 Presidents Obama and George W. Bush were careful to avoid tarring all Muslims with the terrorism brush. Six days after the Sept. 11 attacks, Mr. Bush visited a mosque to warn against the harassment of American Muslims and underline the need to respect Islam. Mr. Obama has sent the same message, refusing to even use the term “radical Islam.” This does not mean that the United States government has simply ignored the belief systems of terrorists. To the contrary, there are reams of research and several congressional reports on the topic. It seems unlikely that a Commission on Radical Islam would add anything.


W. Bush's visit to a mosque was a mistake.  It sent the wrong signal.  In the case of many people, including me, it sent me to the Koran for the first time, for I (we) wondered this: "if it's a religon of peace, now come they're flying planes into buildings?  And then read more about Islam and discovered that it was not at all a religion of peace.  How much better had W. said something robust about Islam and put the hard word on all those "moderate muslims" we keep hearing about, to promote the moderation of its doctrine.  His visit to the mosque just let Muslims off the hook.

And as for Obama "refusing to even use ther term 'radical islam'", well that's just too cooky for words, and has been criticises on left and right, most recently by Sam Harris (a liberal).  By not naming the enemy, you can't fight it.  Obama is even more delusional than this, by saying that ISIS not only has nothing to do with Islam, but that it has "less to do with Islam than any other religion".  This is a barefaced lie (or, at best, a shocking delusion) and helped to turn the tide against Hillary, who bought into Obama's delusions.

Mr. Trump’s commission would be charged with identifying “warning signs of radicalization,” allowing it to veer easily into examining political and religious views. Both the New York Police Department and the F.B.I. have said that indicators of terrorism included political activism and signs of Muslim religiosity, such as growing a beard, wearing a head scarf or giving up smoking and drinking. Although these ideas have been thoroughly debunked by research, they continue to be influential and could serve as a basis for categorizing tens of thousands of American Muslims as potential terrorists requiring monitoring by law enforcement (or worse).


There are numerous reports about how radical US mosques are.  For example here, which links to five reports. Mosques should be monitored more, not less, to see to what extent they radicalise young Muslims.

Research has also found little evidence of support for terrorism among American Muslims. James Comey, the director of the F.B.I., said, “The threat here focuses primarily on troubled souls in America who are being inspired or enabled online to do something violent.” This makes the proposed commission’s mandate of ferreting out networks that support radicalization sound like a witch hunt that could ensnare politically active American Muslims and the civil society groups that work to protect the community’s rights.


Nearly a quarter of American Muslims believe there is a "great deal or fair amount" of support from terrorism in the American Muslim community. [Pew research, reported here]

That seems to be what Newt Gingrich, one of the president-elect’s top advisers, has in mind. Earlier this year, Mr. Gingrich called for a new House Un-American Activities Committee to deal with “Islamic supremacists.” That notorious committee’s hearings and the investigations by Senator Joseph McCarthy into suspected Communists represented some of the most severe political repression in American history and destroyed lives. Today, as falsehoods are spread quickly on the internet and accepted as true, this risk may be even more acute.
These fears are not theoretical. Conspiracy theorists and pseudo-experts poised to peddle lies about prominent Muslim officials and groups have garnered support in both Congress and Mr. Trump’s inner circle.
In 2012, five members of Congress asked the State Department’s inspector general to investigate the influence of the Muslim Brotherhood on the department, citing family ties of Huma Abedin, Secretary of State Hillary Clinton’s closest aide. (The alleged connections were so convoluted that that they inspired a “Daily Show” sketch.) This summer, Senator Ted Cruz held a hearing in which a witness smeared the Islamic Society of North America, an umbrella organization for Muslim groups, claiming it had links to terrorist groups. The same witness also insinuated that the two Muslim members of the House of Representatives, Keith Ellison and Andre Carson, supported terrorism because they attended the group’s events, as had the Homeland Security secretary, Jeh Johnson.


Huma Abadin's family ties are indeed problematic. Her mother is still the publisher of a Saudi Salafist magazine, which promotes the subjugation of women and for which Abadin was an editor and on the masthead for over a decade until around 2005.

The Daily Show makes fun of something makes it not true?  Gimme a break!

What's with the "smearing" of the Islamic Society of North America?  They are one of the original Muslim Brotherhood organisations in the US.  The Muslim Brotherhood's aim is to islamicise the world, nothing less, and they play the long game....

The F.B.I. has a policy of marginalizing the Council on American-Islamic Relations, the country’s largest Muslim civil rights organization. The F.B.I.’s stance, which it claims is based on vague concerns over potential connections to terrorism, is difficult to understand given the bureau’s broad powers to seize the assets of any organization supporting terrorism. So unfounded is the F.B.I.’s stance that it has been resisted by its own field offices and the Justice Department, and the council is a frequent partner of local police departments and other agencies.


CAIR is a Hamas-linked organisation which has a history of trying to thwart every effort by the US government to halt the spread of radical Islam. [Ref: Daniel Pipes]

Baseless insinuations about Muslim groups and individuals are a regular feature on Breitbart, the website run by Stephen Bannon, chief strategist to the incoming president.
Like many campaign promises, Mr. Trump’s commission may never become reality. But it would be far harder to challenge in court than a Muslim ban or registry. It must be vigorously resisted as a threat not only to American Muslims, but all Americans who dread a return to McCarthyism.