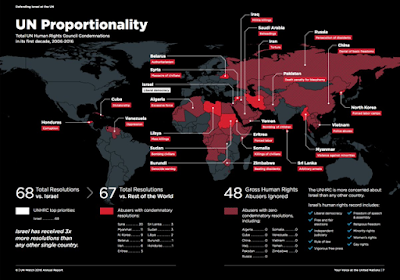 Alex Lo is upset that Nikki Haley denounced various UN bodies ("Nikki Haley is an odious hypocrite on rights", 18 October).  But she's quite right to do so.  The UN Human Rights Council is made up paragons like Angola  DR Congo, Nigeria, Afghanistan and Pakistan.  In its first ten years it passed 68 resolutions condemning Israel alone, more than the rest of the world combined.  Human rights offenders like China, Iraq, Pakistan and Russia were given a free pass.  Whatever you think of Israel, this record is grossly biased, "hypocritical" even. Haley was right to call it out.

The UN Economic, Social and Cultural Organisation (UNESCO) is even "better" than the UNHRC about condemning Israel: its record is 100%. That's right, UNESCO finds nothing to condemn in Iran, Myanmar, North Korea, Syria, Somalia or Venezuela.  Just Israel.

But if these bodies are atrociously biased, they're nothing compared to the UN Relief and Works Agency (UNRWA).  It is grossly overstaffed with 27 times the number of staff per refugee as the UNHCR.  Worse, it has close ties to the terror group Hamas.  It hides Hamas tunnels and rockets inside its schools.  It allows Hamas to recruit children to its Islamic Bloc and to teach genocidal jew hatred.

Without UNRWA, the Palestinian refugee problem would have been solved 70 years ago by absorption into surrounding Arab states. Just as Israel absorbed the even greater number of jews who were driven out of Arab countries on the establishment of Israel, an act supported by the very United Nations that Alex Lo holds up for praise and victimhood.

So, again, Haley was right to criticise UNRWA and stop the United States funding it.

Israel is the key ally of the United States in the Middle East and has been so, bipartisanly  since its establishment.  Again, rightly so, for it is the only true democracy in the region; a democracy that guarantees more human rights to its Arab citizens (20% of Israel) than they have in any other Arab country.

Given all this, I vote that it's the likes of UNHRC, UNESCO and UNRWA who are the true "odious hypocrites".  Ambassador Haley was quite right to withdraw the US from them. Long overdue.