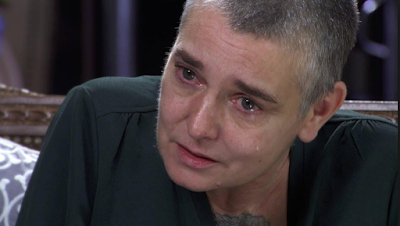 Maybe she should try ripping up a photo of Muhammad just as a little experiment to test the difference between Christianity and Islam. She'd lose her head all over again.  (She had ripped up a photo of the Pope once, with nonce in response).
BTW, it's a Thing I Don't Get. That is, people converting to Islam.  I get that people are Muslims where they're born into it. But to be an adult, read the Koran, etc, and say "yep, that's the religion for me".  You have to be a sociopath, or stupid.  Or both. I suspect Sinead is the latter.  Just the latter.  That's the weight of evidence, for she's had serious mental health problems.
And why I say "sociopath" is because if you read the Koran, that's what it is: a sociopathic manual of death to the unbeliever.  Mohammad must have been a very nasty man indeed.  But to say so, according to the European Court of Human Rights, is now a "hate crime".
Story here.
- October 28, 2018