Who is Kenneth Mejia? 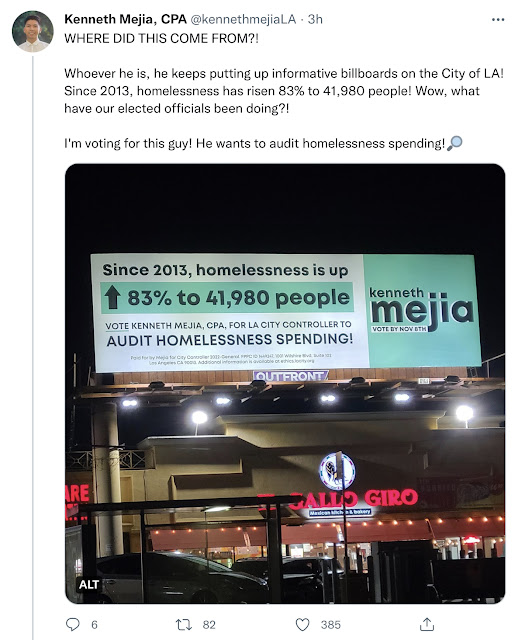 Who is Kenneth Mejia? He’s the guy I referred to yesterday. In the post about Patrick Soon-Shiong.

And why do I care about him? Because I’d read that he said “defund the police town to the last dollar”. And this is a person going for be LA City Controller. Where we have family interests. Would you want someone like that in a city where crime is rising? We have family in LA. Hence the worry.

I delved into Kenneth. Did he really say that? Not so sure. Google him and he comes across as a fresh-faced young kid. Keen. Hard working. There’s nothing like “defund the police down to the last dollar.”

I do find reference to a website “mejiadangerous.com” but that is password-protected (?!). Mejia reports on money flowing to the LAPD, but not sure he wants to defund it “down the the last dollar”, which would be suicidal. He’s sure a leftie and a progressive. He’s photoed with Jane Fonda. She of “China Syndrome” which single-handedly enfeared the public against nuclear, so I’d label her as bigly responsible for our current carbon dioxide problems. But I doubt Kenneth even knows that. To him she’d just be a progressive icon.

Still I have hopes for the young lad. I emailed him. The book mentioned is “San Fransicko” which is a must-read for anyone interested in things Californian. Email:

I live in Hong Kong, but my son lives in LA, so I have a deep interest in the city. And therefore in your campaign for City Controller.
I have read your website policies. They appear well considered. The one I'm most interested in is how to reverse the steep rise in homelessness.
I do sense that your progressive policies tend to the “Housing First” side of the issue. Yet, there are powerful arguments for building “Shelter First”, then earned Housing rights. This is strikes me is both quicker and more economical than the Housing First fix. As well as being the one which — by polls — most Los Angelinos prefer.
Also: you do identify mental health and addiction issues (though only obliquely: “people with disability and substance use disorders”). However, do you have any ideas as to how moneys ought to be used to address them? In my understanding, they are the primary drivers of the increase in homelessness (as opposed to people being too poor, or kicked out of rental housing).
If you haven’t read Michael Shellenberger’s book on this, then you ought to. Don’t be put off by what your progressive mates may tell you about him. He knows whereof he speaks and has ideas that you may not have encountered in progressive circles.
A final thought. You do seem to have many endorsement, all from the progressive left. They may not have all the ideas. Conservatives are more about “Systems”, while Progressives more about “Goals”. If you want to reach goals, you need have systems. That’s something that ought to interest a CPA. Don’t be blind to the wisdom of the masses, of the wisdom of more than the progressives.
Peter Forsythe
Discovery Bay
Hong Kong
+852 9308 0799 WhatsApp
PS: the New York Times on how difficult to build new affordable housing in CA, because of NIMBY’ism. You’ve got your work cut out on this one! — https://youtu.be/hNDgcjVGHIw (8m*+ views).
- September 29, 2022