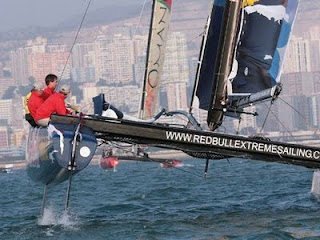 We went out on the water for a sail and to see these Extreme 40' cats racing in HK harbour, on the 20th Nov.  They were a fine sight against the stunning backdrop of Hong Kong's skyline, but the course was short and we were the only spectators (apart from the press boat), so there's going to be a ways to go before it's a true spectator sport in Hong Kong.  Mind, we do have a good waterfront for it, and with the right promotion, it could take off.  The organisers did bill this first race series as a "getting-to-know-you, Hong Kong" event, mainly for the media, with next year to be more fully promoted.  With the coming of the Louis Vuitton Cup to Hong Kong next year, 2010 could be a good year for our harbour....  Our only downside is that the government has seen fit to decide to build a superhighway and tunnel right under the Royal HK Yacht Club in Causeway Bay, which is going to cause massive havoc with the facility and moving of many boats, mess on the very harbourfront it's hoping to promote;  sigh...)