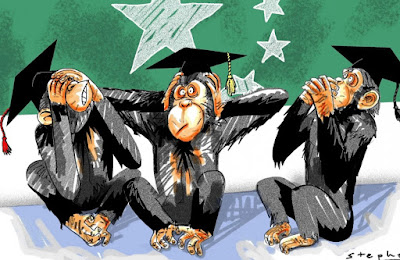 I remember this — the document of the “Seven Unspeakables” — when it was leaked at the time, In 2013. It was promptly ignored in the west and here in Hong Kong. It's chilling list of what you can't even mention in China. Prof Phil C.W.Chan talks about it today in  “Expensive lesson’:


In a 2013 classified directive to local Party committees called "The Current Situation of the Ideological Front", the General Office of the Communist Party's Central Committee laid out seven "unspeakables" in addition to the three Ts of Taiwan, Tibet and Tiananmen. The seven were: universal values, freedom of speech, civil society, civil rights, historical errors of the Party, crony capitalism and judicial independence. Any discussion about any of these subjects would, in Beijing's eyes, endanger China's national security and render the speaker liable to prosecution.

That said, there's a vast and lively online scene in China, open and vibrant. There's a lot of “Digital Disobedience”. Words and phrases used to get around censorship.
Some readers also note that think tanks and unis in China are talking quite openly about (some) issues. They key is what “some”.