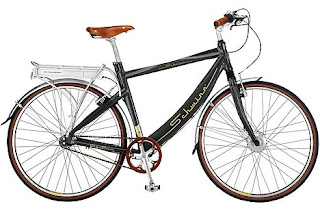 I've been running a dilatory campaign -- perhaps that should read "walking" the campaign -- to have the Hong Kong government allow the use of battery assisted bicycles in Hong Kong (aka e-bikes).  The issue is that the Transport Regulations don't specifically cover e-bikes, so they simply lump them in with motorbikes, which require all sorts of safety gear, helmets and licensing, that just don't make sense for e-bikes.

Many jurisdictions simply deem them to be bicycles and allow people to use them as bikes.  In fact, that's right, because they are no faster (and in many cases are slower) than bicycles, on the flat and downhill.  They are just a bit easier to get uphill, but usually also need to pedal.
I wrote a submission to the government in May 2008, a copy of which is here.
Today's International Herald Tribune has an article, E-China, the bicycle kingdom is going electric (pdf version here): "...production of electric two-wheeler has soared from fewer than 200,000 eight years ago to 22 million last year...".
Maybe I should take it up again for Hong Kong.   A shame to be outdone, and out-flexibled by the Motherland.   I submitted my paper to the Transport Department and got back an anodyne response that simply repeated e-bikes were not covered by the Regulations and hence could not be licensed.  It didn't really address the suggestions I made, but I decided to simply keep riding mine and take the chance of arrest.... (so far, no such luck....).