Next time in Shanghai, check this place out.. 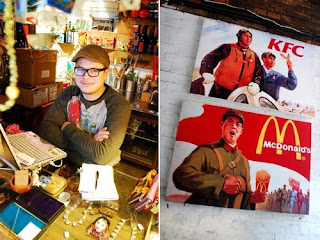 The crumbling stone walls that surround the Tian Zi Fang neighbourhood in Shanghai belie a colourful and fascinating corner of the city, with a cosmopolitan mixture of shops, restaurants and galleries.

Its cluster of tiny Shikumen cottages, some brightly painted, others their original dull grey, are criss-crossed by narrow alleys festooned with colourful banners, Chinese lanterns and the odd bit of revolutionary zeal. It's a place of contrasts, reflecting China's past and future, and is as much home to locals as to foreign entrepreneurs, designers and tourists.
Inside the former 1920s commune, the smells of Thai noodles, Italian coffee and ginseng tea waft through the photo galleries, CD stores and boutiques. Symbols of the Great Leap Forward are mixed with modern iconography: hanging in a makeshift al fresco gallery, chisel-jawed communist soldiers are juxtaposed with KFC logos and the golden arches of McDonald's, and in a silk boutique figurines of Mao dressed in a green great coat are immersed in an aquarium with Chinese carp.

Seems it was kicked off by Aussies, with the Kommune cafe....

Kommune was the first Western restaurant to start up in Tian Zi Fang, opening to meet the  caffeine needs of a band of Australian expatriates.

Even the Australian Consul General, Tom Connor, has been along:

Visitors to the restaurant's weekly Great Aussie Barbecue have included the Australian consul general and the head of Qantas, and there are rumours an Australian ex-prime minister will don a Kommune apron in the coming months.

Access to the original article is by login, so I've dowloaded it to PDF file here.