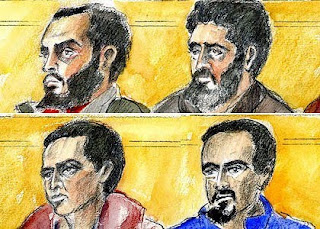 Letter sent to The Age today.   There's zero chance of its being run, but there's hope some sub-editors might read it, and absorb something....  The Australian public is, I feel, more robust on the Jihadi terror threat than the media or politicians....

RE:  Melbourne terror accused…” The Age, 5 August 09
Two of your op-ed contributors (Daniel Flitton, “New twist in the old, familiar al-Qaeda story”, and Berhan Ahmed, “Strong African communities will defeat terror recruiters”, both of August 5, 2009), offer variations of the “tiny minority of extremist” arguments, to urge caution and treatment of the events “with care”.
But are the would-be Jihadis a "tiny section of the community" (Flitton), or a "few marginalized people" (Ahmed)?
In a poll conducted in 2007 and broadcast on Britain's Channel 4 TV, nearly 25% of British Muslims said the July 7, 2005, terror bombings in London were justified. Another 30% said they would prefer to live under strict Islamic Sharia law rather than England's democratic system.
Perhaps a “tiny minority” is a matter of personal opinion?  Reuters, for example, reported back in October 15 ‘06 , that “just” 10 percent of Indonesian Muslims said they backed jihad and supported bomb attacks on the island of Bali aimed at foreign tourists.  But Indonesia is home to more than 200 million Muslims, which means there are some 20 million Muslims in Indonesia alone who are willing to say out loud that they support the use of violence and terror against innocent human beings.

Australia needs to wake up to the threat within our society from Jihadis driven by well-documented and clear Islamic doctrine, which calls for the killing of non-Muslims.  No amount of trying to deal with “marginalisation” or “alienation”, or adjusting our foreign policy, is going to appease such people.  A robust facing up to the Jihadi’s motivation is the first step in trying to deal with the threat.