Swashbucklers of the day 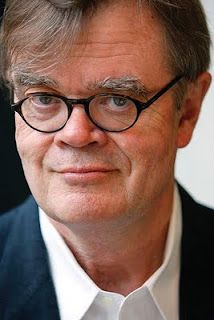 I've been reading and listening and watching  -- Robert Altman's 2006 movie A Prairie Home Companion, which Keillor wrote and appeared in -- the wonderful, whimsical curmudgeon Garrison Keillor since I first heard, many years ago, his Prairie Home Companion on BBC International Radio (675 AM here in Hong Kong).  The Beebs international got taken over by a bunch of anti-fun nutters a few years ago and did away with all the comedy and loopy quiz shows (Just a Minute!) and turned it into a humourless top-of-the-hour bottom-of-the-hour non-stop news cycle; but that's another story.
Today, GK dilates on the fun of blogging (btw, he looks pretty good for 67, doesn't he?):

What the new media age also means is that there won’t be newspapers to send reporters to cover the next war, but there will be 6 million teenage girls blogging about their plans for the weekend. There will be no TV networks to put on dramas in which actors in costume strut and orate and gesticulate, but you can see home video of dogs and anybody’s high school graduation anywhere in America. The U.S. will be a nation of unpaid freelance journalists and memoirists. This is not necessarily a bad thing.

It comes too late for Richard Nixon or Bill Clinton. In the new media age, there would not be a Watergate or a Monica Lewinsky. The president could conspire to break the law or canoodle with anybody within arm’s reach and likely there would be nobody in the forest to hear that particular tree fall. And that would be just fine. All we got from those enormous Old Media events, frankly, was entertainment. They were no more enlightening than a Harold Robbins novel.

I’m an old media guy and I love newspapers, but they were brought down by a long period of gluttonous profits when they were run as monopolies by large, phlegmatic, semi-literate men who endowed schools of journalism that labored mightily to stamp out any style or originality and to create a cadre of reliable transcribers. That was their role, crushing writers and rolling them into cookie dough. Nobody who compares newspaper writing to the swashbuckling world of blogging can have any doubt where the future lies. Bloggers are writers who’ve been liberated from editors, and some of them take you back to the thrilling days of frontier journalism, before the colleges squashed the profession.

The Internet is a powerful tide that is washing away some enormous castles and releasing a lovely sense of independence and playfulness in Americans. Millions of people have discovered the joys of seeing yourself in print — your own words! the unique essence of yourself, your stories, your jokes, your own peculiar take on the world — out there where anybody can see it! Wowser.