What Sharia says about charity.... (or, alms for arms?) 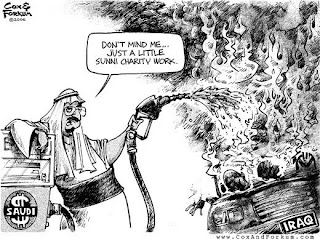 My wife has been onto me recently: “you’re always banging on about the negative side of Islam.  Surely there’s some positives”.

So I took her up and started a re-read of the Koran, looking for positives:  and I found one!   Or did I?...  The Koran calls for the giving of alms, zakat.   How this is given in practice is defined in the Umdat al-Salik, ("Reliance of the Traveller").  Read on, for more on Zakat, the Islamic giving of alms...
What is Zakat?: it means “growth, blessings, an increase in good, purifications or praise” (h1.0.  Sources: see bottom of post*)
Who must pay Zakat?: all free Muslims (h1.1).  Apostates need not pay because “their property is considered to belong to the Muslim common fund from the moment such people leave Islam.” (h1.2, emphasis in the original).  This is because as apostates, they will have been killed (o8.1).
How much is Zakat?:  2.5% (h4.0 et. seq.).  The percentage is a bit different if your wealth is goats or camels, in which case discuss with your investment adviser.
To whom must Zakat be given?:  Most importantly it can only be given to Muslims (h8.7 et. seq.).   This law is derived from the Koran, 9.60 “Alms are only for … those whose hearts are made to incline to Truth (i.e. to Islam)… and in the way of Allah.”  The meaning and intent of the word “Zakat” is therefore materially different from the western concept of “charity”.
There are eight – and only eight -- categories of authorized recipients of Zakat (h8.8-18):

1.  The poor2.  Those short of money3.  Zakat “workers”: i.e. charitable agencies4.  Those “whose hearts are to be reconciled”: such as new converts to Islam. But specifically not non-Muslims.5.  Those purchasing their freedom (i.e. slaves)6.  Those in debt  7.  "Those fighting for Allah, meaning people engaged in Islamic military operations for whom no salary has been allotted in the army roster, but who are volunteers without remuneration” (h8.17.  Emphasis in the original).  PF note: this is why Hamas pays salaries to the families of “martyrs”. 8.  The traveller in need of money (Muslims only).

In all but the Hanbali legal school, the amount of Zakat that one gives shall be divided equally between all eight categories.  That is 12.5% each.  That means that by Islamic law, 12.5% of Zakat will go to those engaged in offensive Jihad.
Note re category 7: Wikipedia simply says “in the way of Allah” (ref).  The Sunni Law according to the 'Umdat is much more direct: “those fighting for Allah” and in case we miss the point: “in Islamic military operations….”.  In short, fighting Jihad.
Muslim charities, have been in the news recently. Muslim organisations and the American Civil Liberties Union claim that Islamic charities are being unfairly targeted for investigation by US authorities.
Given that (a) all Muslims must give Zakat; that (b) Zakat can be given only to Muslims; and that (c) by law at least 12.5% of Zakat must go to military Jihadi operations, there an a priori case for close scrutiny of all Islamic charity groups. In practice we know that Zakat has gone to Jihadi organisations.
****************
* References with letter/number (eg, h8.17) are from the ‘Umdat al-Salik (Reliance of the Traveller), the Classic Manual of Islamic Sacred Law.  See here.
- August 28, 2009