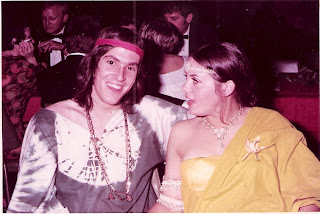 Woodstock’s weekend of Music and Art was 40 years ago this Saturday, August 15.

Remember the times?  We were all there, we baby boomers.   Oh yes, we were! In spirit if not in body.  I was in Canberra, saw the movie as soon as it came out in January 1970, went straight to the Woodstock Pizza Parlour in Garema place as soon as it opened – how cool is that?  That's Sally and me, at it....(not.  It's us at the Nurses' Ball, September 1970, fully baring the spirit of times)

There are plenty of tributes to the Festival.  There’s a great Director’s Cut of the movie with a whole new DVD of just the music, worth the purchase price alone.  I bought it the other day and have reveled in it.

In the press, amongst many tributes, there’s “A moment of muddy grace” in the NY Times.  Make sure you have a look at the readers’ photos.

Seemingly within minutes after it ended Woodstock was the stuff of legend: a spirit, a nation, an ideal, amorphous but vivid, with an Oscar-winning documentary film, the 1970 “Woodstock,” to prove it wasn’t all a hallucination.

Woodstock was different. It was, particularly for a sheltered teenager, an adventure: sloppy, chaotic, bewildering, drenched, uncertain, sometimes excruciating, sometimes ecstatic. Although I was drug free, I had the feeling that the crowd was more than just an audience at a show, that something major was at stake, that Woodstock would prove something to the world. What it proved — that for at least one weekend, hippies meant what they said about peace and love — was fleeting and all too innocent; it couldn’t stand up to everyday human nature or to the pragmatic workings of the market. But 40 years later the sensation lingers.

And for those of us on the on the other side of the globe, and perhaps not quite so drug fee, it was equally a time of adventure, sloppy, chaotic, brilliant, fun, full of promise, wonderful music, ecstatic.   Yes, I was there....   there I am.... 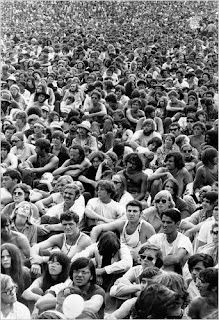