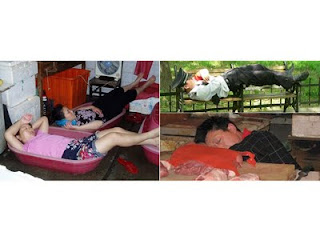 Lovely article in South China Morning Post, 18 Aug, about photos taken of sleeping Chinese, by German business guy, Bernd Hagemann, who has lived in Shanghai for the last four years.

The German amateur photographer has captured his subjects in a variety of unusual positions and places on the mainland - huddled in a plastic tub, dozing on an airport trolley and in a hammock tied beneath a truck - that bring smiles to viewers' faces.
"It's rare to see people sleeping in public places in Europe or America. It shocked me at first when I saw people napping almost everywhere and the fact that it was accepted by society," says Hagemann, 41.

I well remember when I first lived in Shanghai, in 1990, being charmed by people wandering round the streets in their pyjamas and wearing wet towels on their heads in summer.  The street is the common bedroom.