China: "we have the technology" 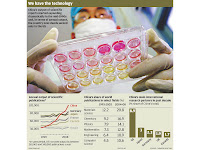 (click image to enlarge)
China too coruscates!  Having written in the immediately preceding post about Israel's achievements and the mentality that helped achieve them, I'd better post a chart that's been sitting on my desktop for some time.  China's research.  I don't have the original article, but the chart tells most of the story.


"China's output of scientific reports started expanding dramatically in the mid-1990s and, in terms of annual output, the country now stands second only to the US."

That is a fantastic achievement, a stunning return on the investment of sending hundreds of thousands of students to study in the west since the seventies.
- February 09, 2010