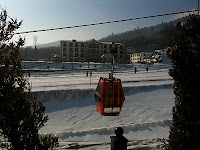 Being some of the few -- the very few -- foreigners skiing in Yabuli, North-east China, seems  I'd better note down some info.
Summary of Yabuli (亚布立): "Sun Mountain Resort" 2-3 hours by car from Harbin, Helongjiang province, NE China (near the Russian border): Cold, good snow, no lines, limited runs, even more limited après-ski.  Fun for a couple of days and good for beginners....
Cold:
Yup, it's that.  Maximum temps each day were around -10 C (14 F).  Range each day was -25 to -10 C.  (-13 to 14F).  But for all that we weren't cold. It's a crisp, dry cold.  With your trusty Paddy Pallin under-longies and face mask, you're set to go.  Here's cold: the Harbin ice festival, with a whole city of ice.... 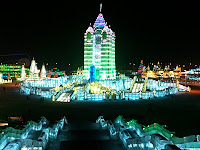 Good snow:
The cold keeps the snow very light.  None of that European or Australian business of melting during the day then freezing at night making for icy slopes.  The snow is smooth, light, well-groomed and the runs well-tended.  The last night before we left it snowed around 15 cm (6") and it was light and lovely -- you couldn't squeeze it into snowballs, it's that light -- and we would love to have hit the slopes again (though off-piste is limited). 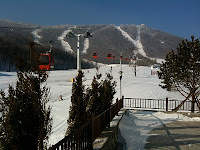 The last day: fresh snow, light and lovely
No lines:
We were there over Chinese New Year and on the most busy day of the year (Last Tuesday 16th Feb) and even then there were literally no lines.  On other days, you were often the only one on the lift, and you might even hang around waiting for some company... an excuse to catch your breath.  So, you get more skiing per hour than in other busier resorts.
The lifts at "Sun Mountain" are an 8-person gondola and a fast 6-person chair.  Each is new, installed last year, by Poma lifts of France, comfortable and fast.  They are both "heated", though not when we were there because it "wasn't cold enough".  When it is cold enough, they turn on the in-seat heaters; I'm sure they would work fine on this new equipment. As it was, we didn't really need the heating.
Limited Runs: 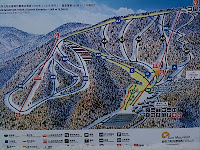 We did enjoy our time at Yabuli, considering it a bit of an adventure.  We would have preferred to leave a few days earlier; three days is enough, really.  We ended up staying for five days, which meant a day off wandering over to the Tiwei's area, and going into Yabuli town, both fun if you're at a stretch for something to do.  I would recommend Yabuli for someone living in China wanting a few days exercise,  good snow and simple runs.
- February 23, 2010