One Law for All, Fundraiser 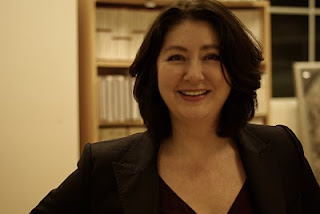 Maryam Namazie (click photo to her website)
This is surely unarguable, isn't it?  One Law for All?  Even for my leftie relatives and mates?  The point Ms Namazie has made in several of her presentations is that the expansion of Sharia Law courts in the UK (there are already nearly one hundred!) is bad for women and bad for children....
Bad for women because they are treated unequally in divorce and custody cases, and bad for children because they are given to the men in custody cases without regard for the best interests of the child.  And the rulings of these "courts" are binding; there is no come-back under Common Law.  What foolishness, for the country of the Magna Carta!
Ms Namazie has been criticized in some blogs for being an American-hating Chomskyist.  I've read some of her stuff, and it does seem that she is an American-hating Chomskyist.  But here's the thing (as Monk would say): we need someone on the Left to take up the cause of anti-Sharia action.  That battle is waged too much, in my view, by the Palin-lovin' (how could they??), gun-totin, abortion-hatin', tea-baggin' members of the Right to far-Right.  I'm on side with the whole anti-Islam thing, I support Geert Wilders, I think resurgent Islam the greatest threat to our western civilisation in my lifetime, right up there with global warming; but I don't feel entirely comfortable with some of the company there, pace some of my rellies who think I've gone over to Genghis.
So, Ms Namazie is making the running on the Left in this anti-Sharia space.  Anyone  -- whether card-carrying Chomskyist, squishy-left, pusillanimous-middle, crusty-Right or Rush-Right -- anyone, that is who cares for freedom of speech, for women's rights, for the rights of gays, for freedom of religion, for tolerance, for the freedom even to offend even, all should support One Law for All.
Below is email from Maryam Namazie, convenor of One Law for all, introducing A.C. Grayling, Professor of Philosophy, at the University of London....

Hello
Nearly 70 people gathered at a fundraising dinner on January 27 at a gastropub in West London to support One Law for All and the Council of Ex-Muslims of Britain.
A C Grayling was the event’s keynote speaker. Guests also heard from comedian Nick Doody, Magician Neil Edwards, One Law for All activist Ismail Einashe, Singer/Songwriter David Fisher, campaign organiser Maryam Namazie and MC Fariborz Pooya.
You can see AC Grayling’s speech on the concept of one law for all at the videos below.  Part 1:

You can see Maryam's brief speech here.
One Law for All 100 Club was announced at the dinner. The Club aims to secure 100 donors willing to donate £10 or more a month towards the campaign.   The steady donations will be instrumental in allowing us to organise our activities for the coming year, including a March 8, 2010 seminar on Sharia law in Britain (see booking form below), an art gallery show in Spring, a June 20 rally, a concert in the Fall, a December 11 conference on apostasy and Sharia laws as well as a survey of women who have been to Sharia councils and tribunals and a ‘know your rights’ legal campaign.   We will also continue raising awareness via the media and various speaking engagements. To hear a recent discussion we had in support of banning the burka on Ireland’s Newstalk radio and read articles about a recent debate on women’s rights trumping religious laws at the UCD Law Society in Dublin, click here. We [One Law for All] will also continue writing about the issue whenever possible. You can read a recent article on Sharia law in the Independent World Report, here:

We rely solely on your support to push forward our campaign against Sharia and religious laws and in support of secularism and universal rights so please do take the time to help if you can. No amount is too little or too big for that matter.