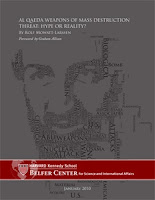 Remember the MAD doctrine during the cold war?  It stood for "Mutually Assured Destruction".  Sounds crazy, but it kept us safe in a post-war Nuclear world.  Simply put the doctrine was that "if you nuke me, I shall immediately retaliate with nukes in overwhelmingly destructive force."  Thus understood, both sides had a pretty powerful incentive to prevent any nuclear strike.  For what rational leader would want to press the button on the destruction, the annihilation, of his own people?  "None", is the answer.  For all the insanity of communism, post-war Soviet leaders had a natural antipathy to death, to commiting national suicide.  Ditto the US.  So this "MAD" doctrine, was sane and rational.

But what should we do if Al-Qaeda were to get hold of a nuclear weapon?  Given that they care nought for their own lives or those of their acolytes -- that death is simply "martyrdom", if the killing is done in the name of Allah -- there's no natural antipathy to death [1].  Indeed, they remind us often that "we love death more than you love life".  I was thinking of this when I came across a research piece by Rolf Mowatt-Larssen, at the Harvard Kennedy School of the Belfer Center [2].
Mowatt-Larssen says:


Al Qaeda's patient, decade-long effort to steal or construct an improvised nuclear device (IND) flows from their perception of the benefits of producing the image of a mushroom cloud rising over a US city, just as the 9/11 attacks have altered the course of history. This lofty [sic -- "lofty"?] aim helps explains why al Qaeda has consistently sought a bomb capable of producing a nuclear yield, as opposed to settling for the more expedient and realistic course of devising a "dirty bomb," or a radiological dispersal device.[3]

The premise is that Al-Qaeda is bent on obtaining a full-scale nuclear weapon, not just the makings of a "dirty bomb".  They want one that will explode a mushroom cloud over an American city.  You don't have to be a signed up member of the paleocon Right, or of the loony-Left to believe that this aim of theirs is entirely in keeping with what we know of Al-Qaeda: their desire to deeply wound the "Great Satan" with the ultimate aim of creating a world Islamic Caliphate, ruled by Sharia law, and to do so by terror if necessary.
So, would MAD work, if they got hold of such a weapon?  Not if dealing with Al-Qaeda itself, clearly.  But they are sheltered by elements in Pakistan, who we know about.  And who don't  say "we love death more than you love life".
Shouldn't there be a clear message from the US?  That if anyone -- anyone -- sets off a nuclear weapon in the United States, the US will retaliate immediately with overwhelming attack on Islamabad, on Peshawar and on Swat.  No question, no waiting.  Then count on those who do have some sway with OBL and AQ to do what needs to be done to ensure they don't do something truly "mad".
Innocent civilians killed?  Of course, as there would be in the US.  But this was also part of the US-Soviet balance in MAD -- there would clearly have been huge civilian casualties in the case of the cold war's going hot.  But that did not stop the implementation of the MAD strategy, a strategy that sanely kept us safe.

References:
[1]  A recent example:  "We are a nation that excels in the production of the art of death.... We should think how to die for the sake of Allah...."  Egyptian cleric Wagdi Ghoneim, Al-Aqsa TV, 4-14 February, 2010.  (Full transcript here. )
[2] Al Qaeda Weapons of Mass DestructionThreat: Hype or Reality?  Rolf Mowatt-Larssen, Harvard Kennedy School, Belfer Center for Science and International Affairs, January 2010.  (here at original link or here PF's download pdf)
[3]  Introduction and Summary of Paper at [1] above.  Here .
- February 26, 2010