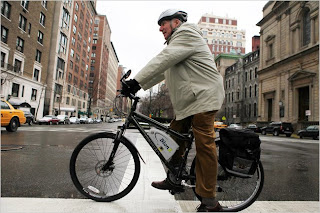 Roger Phillips, 78, uses an electric bicycle in Manhattan,
although they are not officially permitted on New York streets.
(courtesy New York Times)
Attentive readers may recall that I have been running a sporadic campaign to have e-bikes legalised in Hong Kong.   In part that's involved my riding round on my own e-bike in an attempt to get arrested.  I want to get arrested so that I can have its legality tried in court.  The issue is that e-bikes don't come under any one of the definitions of "vehicles" in the Road Transport Regulations and therefore they're by default classified as motorbikes, which they're clearly not and clearly cannot pass tests as motorbikes.
I put in a submission last year to the Transport Department in which I reported on tests I'd done comparing the speeds of an e-bike with a normal bike.  I did this with my son, using the boat's GPS, so I measured in knots.  My son on his normal bicycle was faster at every point of sail apart from uphill, where the e-bike was about a knot faster, but even then, we were both were slow -- about three knots, depending how hard on the hill we were.  My submission elicited a polite, non-committal response from the TD, but no shift in the classification of e-bikes.  Strangely enough, it doesn't seem to be a priority with the Hong Kong government, heavens knows why.   Perhaps they were busy trying to avoid the GFC.
In many other jurisdictions, e-bikes are classified as bicycles, if they're under 700 watts of power, which is all we want here in Hong Kong.
Meantime, there has been a number of articles on e-bikes, including this one  recently in the New York Times.
So, how's my campaign to get arrested going?  Not too well.  For a start, I live in a place in Hong Kong which is so safe that they removed the only police post some years ago, so we are only visited by the Old Bill on rare occasions.  And then, when they do visit, they're always too preoccupied with whatever it is they came for (rescuing lost cats, seeing to a domestic dispute), that they ignore this oversized Gweilo on his piddly e-bike, no matter how hard I try to gain their attention.
If only all my problems could be those of failing to get arrested for committing a "crime"...