Re: Obama and Trump doctrines compared 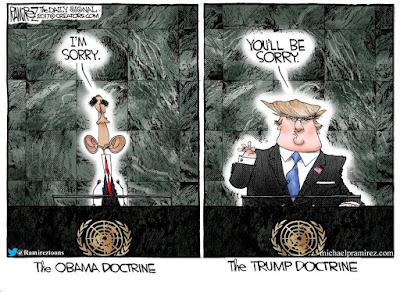 P: thanks for the cartoon. Pretty much spot on!
Mind you: If I were American I would have voted for Obama. Certainly in his first term and very likely in his second as well (if only because Romney is a Mormon. All religions are crazy but Mormonism crazier than most).
By the end of Obama's presidency, I would have been disappointed —especially in his foreign policy. On the fairest analysis, it was pretty much of a train wreck.
Early on I'd hated his Cairo Speech to the Muslim world. Full on mea culpa and nothing expected, let alone demanded, of the Muslim world. And for what? A big fat zero in return, from the OIC. *
Later I was shocked when Obama let the Syrian "Red Line" be crossed with no penalty. That one decision (really a non-decision) measurably added to the chaos in the Middle East.
So I'm always a bit surprised when his supporters (of which, remember, I would've been one) talk of him in hushed and awed tones with nary a peep of reflection on his foreign policy record. That record may go down as one of the very worst of any American president.
Stephen Colbert last night, for example. In his opening monologue Colbert looked into the camera — after a clip of Obama commenting on the latest efforts at "repeal and replace" Obamacare, the GOP's very own zombie policy — and said, almost with tears in his eyes, "We miss you, Sir!"

Best
P
------—------
* The concept of "zero": one of the alleged "inventions" of the Islamic world came instead from Indian mathematicians. Of the many inaccuracies in Obama's Cairo Speech: that Islam invented the compass! We all
know that was just another of mother China's many inventions. The Cairo speech was just another example of Obama bending over (forwards!) to osculate the Muslim world's collective bum.