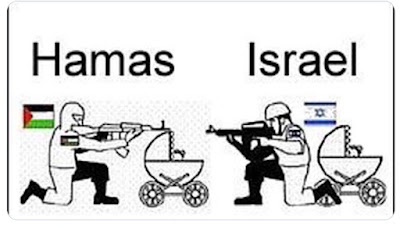 The times I've discussed Middle East issues with pro-Palestinian friends and I claim that young Palestinians are educated to hate Israel and hate Jews, often as not there's no acceptance of that and a challenge to me to "prove it".
Well here it is, in the Clarion Project. By two unimpeachable bodies, the UN's UNESCO and IMPACT-se. Full detail of what's going on in Palestinian schools. Sad thing is that it's getting worse.
Including that kids are taught there can be no negotiated settlement, ever.
So what of those who always blame Israel for "no progress" in talks. It's true, as Israel says, that it "has no counterpart"'to talk to.

A bipartisan bill proposed in Congress mandates the review of educational materials used in Palestinian schoolbooks. The bill states that despite a curriculum rehaul in 2016 and 2017, Palestinian education for grades 1 through 11 "fail to meet the international standards of peace and tolerance in educational materials established by the United Nations Educational, Scientific and Cultural Organization."
The United States contributes millions of dollars every year to the Palestinian Authority and UNWRA (the United Nation's Relief and Works Agency which provides services in Gaza), organizations responsible for the education of Palestinian children. Moreover, the U.S. is the largest single donor to UNWRA with $354 million pledged in 2017 (more than double the donation of the European Union).
However last year, the U.S. ended up withholding $305 million from UNWRA after the agency fails to implement reforms the U.S. deemed necessary.
Clarion Project recently caught up with Marcus Sheff, CEO of IMPACT-se (the Institute for Monitoring Peace and Cultural Tolerance in School Education). IMPACT-se reviewed Palestinian textbooks last year, finding that the textbooks "groom young Palestinians to sacrifice themselves to martyrdom" and "feature a radical Islamist…worldview."
The review has already been used by legislators from the European Union in April to stop providing funds to the Palestinians used to finance educational materials considered discriminatory or intolerant.
Clarion Project:  Can you explain the purpose of the Palestinian Authority Educational Curriculum Transparency Act and how it will work?
Marcus Sheff: The bill will mandate the secretary of state to check the PA curriculum through the prism of internationally recognized standards of peace and tolerance. These are:
Clarion: What specifically have you seen in PA/UNWRA textbooks that prompted the need for this bill?
Sheff:  The key findings are:
Clarion:  What happens if State Department reviewers find hate in the textbooks?
Sheff: The secretary of state will report back to the House Foreign Affairs Committee about radicalization and whether U.S. taxpayer money is being used to pay for it. The committee will take action based on the report.
Clarion: The Palestinian Authority remained defiant after the passage of the Taylor Force bill, which stops payment from U.S. tax dollars that the PA uses to compensate terrorists and their families. Do you think this bill will motivate the PA and UNWRA to change?
Sheff: Yes, in term of textbooks, pressure from the U.S., EU and European countries could well motivate UNWRA and might motivate the PA to change.