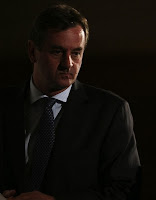 Below I have extracted the Islamic Finance section (aka "Shariah compliant Finance") of Australian Senator, and Assistant Treasurer, Nick Sherry's speech in Doha recently, with my comments in red.
There he is at left, in the dark, about Islam....
See also my Open Letter to Simon Crean about the subject.