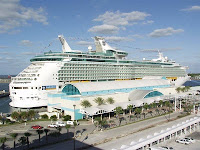 [Left: cruise liners are their own self-contained cities]
One of my forays into local Hong Kong politics was the campaign a few years back to stop the building of a Super Prison on Kai Sai Chau Island.  A group of committed citizens, auto-didacts on incarceration, managed to stop that one, and years later we've been thanked by government officials who admit it would have been a gross error.   Imagine that, thanked by bureaucrats.....
Another one I was involved in -- with less success -- Cruise Terminals.....

... That is, the Hong Kong government's proposal -- now a project -- to convert the old airport in Hong Kong, Kai Tak -- that lovely, memorable airstrip right in the middle of the city, with its heart-stopping landings low over Kowloon apartments --  into a cruise terminal.  The arguments against it were pretty strong, but didn't carry the day, mainly because the Chief Executive of Hong Kong (like the executive Mayor), Donald Tsang, loves pouring concrete and doing anything that he thinks will give employment to the construcition sector.  Jake Van der Kamp used to say that he may as well build a tunnel to Antarctica, the effect on employment would be the same, without the downside of an above-ground eyesore.
Today Tom Holland writes of the likelyhood that the Cruise Terminal at Kai Tak will probably be one such white elephant, in any case not make any money.  Most of the arguments he makes here were rehearsed in the efforts to stop the terminal and have something else put in its place.  You'd think they would have learnt something from the dismal results of Disneyland, which the government promoted with much the same reasoning as it has with the cruise terminal....
I wonder how many in government would be thinking that they should not have gone ahead with this one as well, and would rather be thanking the group of concerned citizens who had suggested other uses for this wonderful space instead -- parks, outdoor activities, arts centres.....


Last week a string of government notables including Financial Secretary John Tsang Chun-wah, Development Secretary Carrie Lam Cheng Yuet-ngor and Commerce Secretary Rita Lau Ng Wai-lan lined up to applaud the signing of a contract with French construction company Dragages to build a terminal for ocean-going cruise liners on the site of the old airport at Kai Tak.

After no private-sector developers proved willing to step up to and fund the project on the government's terms, the terminal is to be paid for entirely from public funds as one of Chief Executive Donald Tsang Yam-kuen's 10 pet infrastructure megaprojects.
Altogether the government has budgeted HK$8.156 billion for the terminal, with officials justifying the massive cost by arguing that it will bring big economic benefits for the city. Building extra berths for large liners, they say, will ensure that Hong Kong maintains its position as a favourite destination for the fast growing cruise industry and its hoards of free-spending passengers, with the new terminal generating between HK$1.5 billion and HK$2.6 billion a year.
Our officials are likely to be sorely disappointed. The cruise industry may well be growing quickly - passenger numbers topped 13 million last year, up from fewer than three million 20 years ago - but the economic benefits go overwhelmingly to the cruise operators, not to the economies of the ports where their ships call.
That's especially true in Hong Kong. According to the Hong Kong Tourism Board, 780,000 cruise passengers visited the city in 2008, but the vast majority were embarking on overnight gambling trips into international waters on casino boats. They weren't interested in spending their money in the city.
According to the tourism board's figures, spending in Hong Kong by cruise passengers in 2008 came to HK$57 million. That equated to just HK$73 per head and amounted to less than 0.05 per cent of the city's total tourist receipts for the year (see first chart).
To put that amount into perspective, in the same year visiting servicemen - principally the crews of US warships - spent more than HK$182 million in the city: more than three times as much as cruise passengers (see second chart).
No doubt the government would argue that is why Hong Kong needs a new cruise terminal: to attract more and bigger liners carrying a better class of passengers more ready and willing to splash out when they come ashore.
But the argument doesn't hold water. A few decades ago it may have been true that passengers embarked on cruises primarily to put ashore in exotic ports of call like Hong Kong. No longer. Today cruise liners do not aim to be a gentle means of transport from one destination to the next. Instead they are all-in floating resorts, complete with restaurants, nightclubs, cinemas, spas, sports facilities and duty-free shopping arcades.
The whole objective is to get passengers to spend their money on board the ship, not when they go ashore. And even when they do put into port, the cruise lines still take the lion's share of passengers' spending.
Studies from the Caribbean, the world's largest cruise destination, show that cruise lines typically pay local operators only between a third and half what they charge passengers for booking onshore excursions. That squeezes out direct spending ashore.
As a result, passengers visiting Caribbean destinations spend less than US$100 per head. And even then the cruise lines take their cut. Local restaurants and shops have to pay a commission to the cruise companies of up to 40 per cent of sales merely for the privilege of getting their passengers' business.
Of course, visiting cruise liners wouldn't just bring passengers to Hong Kong. According to the Association of Caribbean States, a single cruise ship emits as much exhaust fumes as 12,240 diesel vehicles, as well as pumping out 7,000 gallons a day of oily bilge water and 100,000 gallons of polluted waste water.
Granted, the Hong Kong government aims to be more than just a port of call for visiting ships. It hopes the new terminal will persuade cruise lines servicing the growing mainland market to adopt Hong Kong as their home port, generating more income for local businesses. But there Hong Kong will be competing against lower-cost terminals already under construction in Xiamen and Shanghai, and yet more planned for Tianjin, Qingdao, Dalian and Haikou on Hainan island. Everyone it seems has the same idea.
As a result, it looks highly unlikely that the new Kai Tak cruise terminal will generate anything like the economic benefits that the government believes. That leaves the 2,940 new jobs the project is expected to create looking very expensive. For the planned cost, officials could give each of the workers HK$2.77 million each and tell them to go home. Or of course, the government could simply dump HK$8.156 billion of public money straight into the harbour. The economic benefits would be much the same. 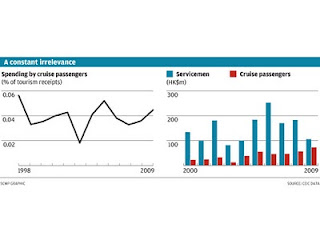