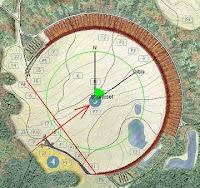 AFP, in the article below, clearly sympathises with Faisal Abdul Rauf, the Imam promoting the building of this mosque at "ground zero" Manhattan.

But he's not the moderate he would have us believe.  Madeline Brooks reveals that he's a "911 denier": that is, doesn't believe that the planes were flown by Muslims, and he blames America for the "tragedy".  More, he has "numerous ties to CAIR, an unindicted co-conspirator in the Department of Justice funding case brought against Hamas, an openly terrorist organization".
Meanwhile, we learn something about the still-to-be-built memorial at the "ground zero" for Flight 93 (click image above left)

Rauf's claim that the mosque will help inter-faith understanding and so forth, is at best mere hope, at worst taqiyya.  For there is no "moderate" Islam, and if the mosque goes ahead, what are the chances that those with a clearer and deeper understanding of Islam will control it?  Then it will have to stop welcoming non-Muslims and running Rauf's naive or disingenuous Kumbaya version of Islam lite.
See Turkey Prime Minister on "moderate Islam", in my South Park post:


"These descriptions are very ugly; it is offensive and an insult to our religion.  There is no moderate or immoderate [sic] Islam.  Islam is Islam and that's it." [Source: , August 21, 2007].