Jesus gets dissed, supported by Huffpost. But what of the dissing of Muhammad? 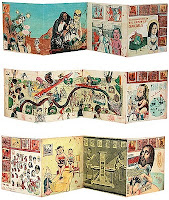 Crikey!
This is going to be interesting!  One rather hopes...
The left-wing Huffington Post is all huffy about some folk that are upset by a piece of art which pokes fun at Jesus.  Put a sock in it, they're saying, free speech trumps all.
("... the first amendment does give us the right, with or without governmental subsidy, to speak freely, even it that speech is desecrating [sic??] to someone else and their religion.")
And quite right too.  But.....

But it's just that they, the Huffpost and other media especially on the left, weren't so vocal, -- c'mon, they were studiously silent, "I-hear-my-mother-calling" silent -- when it was free speech of the Danish cartoonists, or of South Park's Muhammad, or of the dopey pyrotechnic "Pastor" and his would-be performance art-cum-conflagration, or more recently of Molly Norris, now in hiding because she upset Muslim sensitivities -- over an issue of free speech.  Molly Norris "is no more", says her staunchly brave, free-speech supporting publisher [not].

Anyway, what does not seem to have dawned on the Huffpost's Leanne Goebel, so huffy over Christians upset at the depiction of Jesus getting a blow job by some disciple, is that the tryptich not only disses Jesus, but also the Prophet (PBUH).    Holy S*%t, Batman!  Let's get outta here!

The self-righteous Leanne seems simply to have missed it.

Check it out, the panel in the bottom of the tryptich has Mohammed at a lap dance bar, the "girls" with pig faces and the Messenger looks quite keen to slip one to them (a $5 note, I mean).....  Goodness, how vile is that?!

Thanks to the fearless Canadian blogger Blazing Cat Fur for the find on this.

Looking forward with keenness to seeing what happens when some sensitive soul in the Muslim world picks up on this and demands the mandatory separation of artist Chagoya's head from the rest of his infidel body.  Will Goebel and her Huffpost cronies stand at the free-speech barricades then, as bravely as she does now?

BTW: check out the perniciously dishonest headline of Goebel's piece (as dishonest as her long-ago near-namesake was): that the complaining Councilman may want to explore why a piece of art "turned him on".  This was in quotes suggesting that those were his words.  They were nothing of the sort; the whole thing a construct by Goebels, "... according to the definition [of pornography] on my Mac computer".  Now, I'm not on the Councilman's side on this; like most men, I'm quite relaxed on pornography issue; but it's a case of Goebels smearing the fellow based on her own dishonest construct of what he said and didn't say.

Anyway, "free speech" über alles, and three cheers to that, I say.  Let's just see what happens when the adherents of the Religion of Peace" notice this latest disrespect to their Prophet, call for various inventive acts of violence, and what Ms Goebel and her Huffpost cronies say then....