On the furphy that "Muslims are the new Jews" 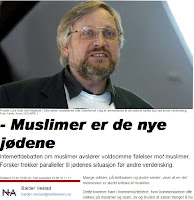 I just posted an article by John Vinocur, which is a more subtle argument of the sort we hear increasingly, as a counter to criticsm of Islam: intolerance stalks the land, Muslims are being demonised, just like jews in Nazi Germany, if we're not careful it's the ovens all over again;  Muslims are the new Jews.  Yikes!
Crikey, we even see it in Norway, as in the photo above, which comes from a Norwegian Blog.  "Muslims are the new jews" screams the headline, a comparison which that Blog calls "illiterate and ill read".  Indeed.
I also wrote about the issue here.
And then there's the inimitable Christopher Hitchens, he of impeccable Trotskyist provenance -- in case we think it's only the knuckle-dragging troglodytes of the right who don't accept this calumny --  in an article in Slate magazine in September.  You can see it here, and also on full below.

A quote from the Hitchens piece, germane to the above point: the furphy that "Muslims are the new Jews":


Reactions from even "moderate" Muslims to criticism are not uniformly reassuring. "Some of what people are saying in this mosque controversy is very similar to what German media was saying about Jews in the 1920s and 1930s," Imam Abdullah Antepli, Muslim chaplain at Duke University, told the New York Times. Yes, we all recall the Jewish suicide bombers of that period, as we recall the Jewish yells for holy war, the Jewish demands for the veiling of women and the stoning of homosexuals, and the Jewish burning of newspapers that published cartoons they did not like. What is needed from the supporters of this very confident faith is more self-criticism and less self-pity and self-righteousness.

Free Exercise of Religion? No, Thanks.

The taming and domestication of religious faith is one of the unceasing chores of civilization.