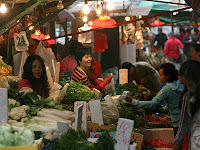 Since the handover in 1997, there has been a clear increase in local interest to preserve historic Hong Kong.  Witness the fights over the Queen's Pier, Wedding Card Street (Wanchai) and now Graham Street in Sheung Wan, west of Central.  In response, the government has even set up a Heritage Commission to try to identify those areas that ought to be protected.   This is all good news.
The bad news is that the government's knee-jerk reaction to "old" is to "rebuild" it: of course with the major developers making fat profits out of it (declaration of interest: we own shares in some of said developers.  Still, I'd rather they had a bit less profit, and hence slightly lower share price, than for places such as Graham Street to be destroyed in the name of "development").
Today Katty Law, of the Central and Western Concern Group, writes a nice letter beseeching the government to save the best of the old,  the best of Graham Street. [go to her letter and vote 5-star for it!]
My letter in support is below, and her letter below that....
[photo: Graham Street, by Felix Wong, courtesy SCMP]
To the Editor, South China Morning Post:
I fully agree with Katty Law about the need to preserve the Graham Street area ("Let's halt destruction of historic Graham Street area for profit", Letters, 8 October”).  [see below]

When I show guests to Hong Kong around our city, one of their best and most abiding impression is of our vibrant, bustling streets and street markets.  Tourism is an important industry for us; let’s not spoil our best attractions.

We don’t need to do anything at all to them — just keep them as is.  If the government must do something then let it be the sorts of things already proposed by the area Concern groups: paving, pedestrianising, rehabilitating and so on.

The government needs to show that “consultation” really means something.  That when it consults and gets local input, that it will take it into account.  Only in this way can the government prove that it is not in the pockets of the big developers.