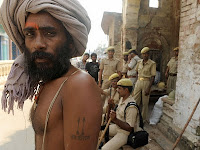 Now there's a headline!  It's the updated version of "man bites dog".
"Dog bites man", of course, being represented by headlines that have become all too drearily common, the like of "Muslims run riot after latest insult..."
Note that the reason Ayodya Muslims remained calm was cause they thought they'd get beat up on if they didn't.... AND, that they are, apparently, a "negligible population" in the area.
Brief history of Ayodhya: Chinese influence, BCE, then one of India's most holy places for Hindus until the Mughals in the 16th Century built a mosque on the site.  Wikipedia delicately says "Ayodhya, like other Indian cities, came under Mughal rule." And opines -- in a seeming breach of its own guidelines to take a "neutral point of view" or NPV -- that "The cultural fabric was enriched with the coming of the Mughals."  In part, of course, by destroying an ancient temple...

[photo courtesy of SCMP: A Hindu holy man at the Ayodhya Temple]