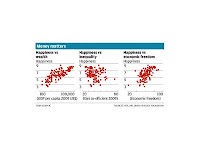 Tom Holland in the South China Morning Post’s Monitor column always writes interesting pieces, the one below about the correlation between Happiness and three factors: wealth, freedom and equality.  Turns out that the closest correlation is with wealth, which led to the exhange of emails below.  [Link to Tom's column is here, but it needs login, so I have copied it in full below].
I was also interested as I’d recently been using the Spearman correlation co-efficient, in looking at the relationship between political-civil rights and the percentage of Muslims in the community, here.  There is a co-relation of 0.61, which is statistically significant, as evidenced by discussion in this paper.
[PF email, Jan 25]
Hi Tom,

Yet another great column on the Happiness Index yesterday!  Reminds me of the bumper sticker: “I’ve been rich, I’ve been poor.  Rich is better”...
And another one: “I’d like the chance to show that money can’t make me happy”.

BTW: you say that the co-efficient of 0.57 for the correlation between happiness and economic freedom is “nothing to write home about”.  From my reading on the Spearman co-efficient, it’s only a shade under what would be considered a “significant” relation (0.60) and eye-balling the chart, it does seem to have some relationship, albeit not as strong as the one with wealth.

thanks for your message. Your make a fair point about the happiness/economic freedom bordering on the significant. My point here is that, although there is a correlation, it is certainly not strong enough to support the Heritage Foundation’s claim of a causal relationship ie that greater economic freedom leads to more happiness. Given the stronger correlations between happiness and wealth and between wealth and freedom, the freedom/happiness correlation looks secondary.

Tom
______________________
Hidden dangers of the politicians' happy talk
Tom Holland
Updated on Jan 24, 2011
As my good friend Lai See pointed out last week, there's been an awful lot of nonsense talked recently about happiness.
In the United States, the new speaker of the House of Representatives - second in line to the presidency - is fond of talking about how the right of Americans to happiness is enshrined in the US Constitution.
Across the Atlantic in Britain, the Prime Minister David Cameron is trying to whip up enthusiasm for his own index of national happiness.
Closer to home, in Guangdong the Communist Party has pledged to make improving "gross domestic happiness" the main objective of its next five-year plan and has adopted the slogan "Happy Guangdong" in an attempt to spread the message.
And here in Hong Kong, the Heritage Foundation, which this month declared our city to be the freest economy in the world, said that the more economic freedom a country enjoys, the happier its people will be. Apparently, solid property rights, low levels of government involvement in the economy and consumer choice are the key to happiness.
The first of these examples is especially worrying. Despite what America's third most senior politician might think, nowhere in the US Constitution or its 27 amendments is the word "happiness" ever mentioned.
All that stuff about "life, liberty and the pursuit of happiness" is actually from the Declaration of Independence, not the constitution.
But the other examples are troubling too. Usually, when politicians start talking about how the economy isn't everything and that happiness is important too, it is a sure sign that they have made a mess of economic policy and that growth has stalled, inequality has shot through the roof, unemployment is on the rise or inflation is out of control.
Happiness, it seems, is a much abused quality. The trouble is that happiness is notoriously hard to define and measure, which means it can be suborned in the name of all sorts of dubious causes.
Some people claim material well-being is the key to happiness. Others reject this, maintaining that health, education and an unpolluted environment are the essential elements. Right-wingers like the Heritage Foundation, believe the road to happiness is found through greater economic freedom.
The left, meanwhile, argues that conspicuous consumption by a wealthy few breeds envy and frustration among the mass of poor.
They say equality of income is essential for a happy society. In an attempt to examine some of these claims, Monitor has been looking at the available data. Happiness is a tricky one, but clearly the best way to determine whether someone is happy or not is to ask them.
This is exactly what the Gallup Organisation does, asking people in countries around the world "on a scale of one to 10, all things considered, how satisfied are you with your life as a whole?"
In Gallup's 2009 survey, the title of happiest nation in the world went to the Central American country of Costa Rica, with a score of 8.5. At the other end of the scale, the unfortunate East African country of Tanzania could muster a score of only 2.4, considerably lower, for example, than the occupied territories of Palestine.
In general, however, as the first chart below shows, there is a clear correlation between material well-being, as measured by gross domestic product per capita for 2009, and Gallup's subjective satisfaction score.
Broadly, the richer an economy is, the happier its people.
A sample of 126 countries, gives a Spearman's rank correlation co-efficient between happiness and GDP per capita of 0.8 (where one would be a perfect correlation and zero no correlation). That's pretty tight. Happiness and material well-being walk hand-in-hand.
Next, equality of income may be a nice idea, but it turns out not to be very important for happiness. As the second chart below shows, there is little clear correlation between a low Gini co-efficient of inequality and subjective satisfaction. The same 126 nation sample gives a Spearman co-efficient of just 0.24, not far off zero.
But if the left's claims are dubious, then so are the right's. As the third chart shows, there is a correlation between happiness and economic freedom, but a poor one.
Our sample gives a Spearman co-efficient of just 0.57, which is really nothing much to right home about. Certainly in this case, the correlation is far too weak to indicate cause.
So there you are, despite all sorts of statistical claims, it turns out that by far the closest correlation is between happiness and material wealth. On the whole, people in rich countries are happier.
So if the government starts blathering about how the economy isn't so important and that happiness is the main thing, you will know it is an ominous sign.
tom.holland@scmp.com