Marrickville councillors engage in some ill-advised and ignorant foreign policy 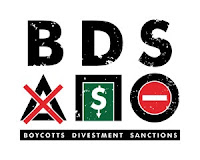 I signed the petition recently, to object to the above -- the resolution of Australia's Marrickville Council to carry out their own little bit of boycott against Israel --  and recently got a message from the organisers of a petition, which I urge readers to visit and sign:

I am writing since you were kind enough to add your voice to the petition opposing this ill-informed and divisive BDS campaign against Israel, initiated by ten local councillors in Marrickville/Sydney.

So far we have collected 3,500 signatures since 29 December.

Before we close the petition on 31 January and begin organising the handover in February, we would still like to push it across the 5,000 mark.

Will you able to give us a hand and blow that little extra wind under our wings?

C’mon, pounce on your relations once more so we get more civil and decent people voicing their opposition to blind hatred, discrimination and Islamic terror.

The petition is here.

If you consider writing directly to the council, there is a pdf file with all contact details of the Marrickville councillors for downloading here.

In case you are having difficulties downloading we can email you a copy.

Please keep in mind that councillors Victor Macri and Morris Hanna voted AGAINST the BDS motion. The motion was driven by councillor Cathy Peters (Greens) and voted in by herself and the other nine councillors.

If you can think of other civilised means and ways to build public pressure on this despicable council, we love to hear from you.