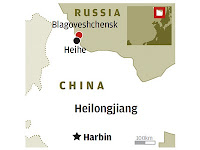 Another amazing China story, this one reflecting the difference made by the culture of growth and entrepreneurialism, vs the culture of bureaucracy and planning.  Again, China being on the side of building vs, destroying...
Also strengthens my new year's resolution to spend more time in China this year.  It's always worthwhile, always provides an adventure and there's no excuse for me not to, living in Hong Kong, on the doorstep of the motherland.
(posted in full as it's available only on subscription.  Thanks to SCMP of 4th January).  BTW: "Heihe" means "black river", as in the name of the province, Heilongjiang, which means "black dragon river" ("jiang" just being a bigger river than "he").  For other amazing China stories, click on "China" in Labels, below right.