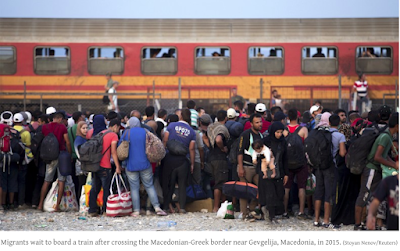 Not only the US, but Australia too was right to be wary of this bit of camel-nose-in-the-tent.
I wrote about it the other day. It's not so hidden agenda is to criminalise the criticism of any form of immigration.
Fie on the UN for yet another bit of anti-westernism....
Jonathan Tobin in the National Review:


Once again, President Donald Trump is raining on an international parade.

Representatives of 164 countries gathered in Marrakesh, Morocco, this week to sign the Global Compact for Safe, Orderly and Regular Migration. The agreement is the result of years of negotiations by U.N. bureaucrats and was motivated in large part by the depressing spectacle of millions facing hardships and death as they sought to escape conflicts in Africa and the Middle East. Those promoting the pact regard it as the first step toward better treatment for migrants and refugees, and more cooperation between nations when it comes to the movement of these populations.  More...
- December 17, 2018