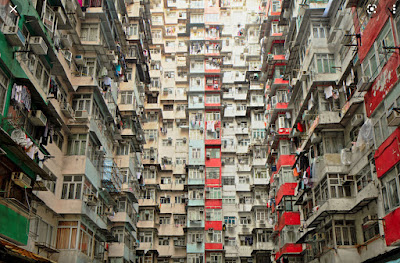 Well tycoons are responsible for at least some of Hong Kong’s housing woes, and many folks would say “most” of them. Given that they do hoard land. And build “nano flats”. But, yes, so is the government, which has so far failed to repeal the “indigenous housing policy” to give just one egregious example.

Louis Loong is contesting the functional constituency seat (a kind of “rotten borough” system”) for the real estate and construction sector in our Legislative Council elections on 19 December. He kicks off by serving one to Beijing’s media, so it’ll be fun to see how that goes. [ADDED: the headline has been changed from this morning saying the Beijing media is “wrong” to saying they “misunderstood”]

Reminds me that I’ve voted in every HK election since I got Permanent Residency. But I won’t be in this December’s Legco ones. Rather too much laden with “patriotic candidates” for my taste.

In previous elections there were genuine choices. They were fought fairly and squarely. I thought. In one election for District Councillors I was drafted in as campaign chairman for Laurence Leung going up against our local Islands councillor of the staunchly anti-government Civic Party. It was fought tough and sometimes dirty — I was called “Hitler” for goodness sake, for having fought, as Chairman of our City Owners’ Committee, to keep our popular Hire Car service, which the Civic Party member had fought to outlaw based on her feuds with the owners of the service.  All politics is local, it’s said. Certainly they elicit heated passions. That we won the Hire Car issue didn’t endear me to the Cicic party member and her acolytes.  In the end we lost that election. To that same Civic Party member. But tough and dirty as it was I never thought it unfair or illegitimate. The voting process here in Hong Kong seems to me fair, open and transparent. And continues to be.  Sure it’s limited suffrage. But what there is, is not nothing and is done fairly.

But still, I’m not voting Sunday week. They’re advertising it on radio as the ‘enhanced voting system”. Which it is … if by “enhanced” you mean “limited”.