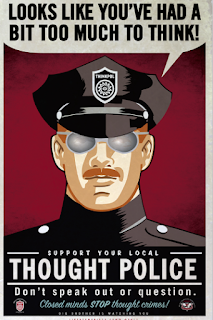 Wow this is truly scary.
Report from Bruce Bawer who is an award winning author and knowledgeable critic of Islam. The Plod recently did over a fellow in England.  The land of George Orwell, who coined the term “Thought Police” in his 1984.
Bawer recollects when the same had happened to him in Norway.
The initial report is in Jihad Watch, run by Robert Spencer who is NOT Richard Spencer, the notorious neo-Nazi and is not the extremist "Muslim hater" the Left would have you believe. He too is an extremely (the only way he's "extremist"...), knowledgeable critic of Islam. Of Islam the idea, Islam the concept, Islam the ideology, Islam the way of life. Not of Muslims, the people - who he sees as being *victims* of Islam, more even than we infidels.
A new twist: the Left will now claim that conservatives who speak up for Free Speech are only doing so so that they can spout awful nazi propaganda.  You can’t win...
- April 09, 2018