Hong Kong’s silent majority is fed up of violent protests 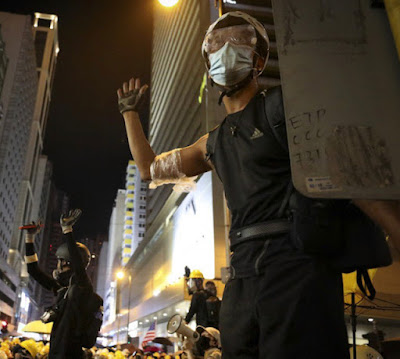 My letter to SCMP was published today. After one by Jing was published last week.
I sound like an old fuddy duddy here, which is because I am. Still, as Alex Lo pointed out the other day, seeking unattainable goals means you'll lose the fight. And it's true that most of the demonstrators' demands are unachievable. Or inchoate. Eg, "Free Hong Kong". What?! We're already very free. Much more so that all cities in China. Every bit as free as London, New York or Sydney. Or "Modern Revolution" (时代革命) Huh?  If you mean like Venezuela or Cuba, colour me out, as an old reprobate, a reactionary conservative, and a solid "no thanks".

One doesn't have to be pro-Beijing to be fed up with the shocking violence on our streets, perpetrated by a minority.
Where is the poll of Hongkongers to find out what our quiet majority thinks? In 2014, a University of Hong Kong poll showed an "overwhelming majority" (nearly 83 per cent) wanted the Occupy protests to end. Our own straw poll suggests the same overwhelming majority today are sick and tired of the violent protesters and their inchoate aims.
And no wonder.
Just look at the news in the Post: retail sales plunging ("Shops in Causeway Bay see sales hit by Hong Kong protests", July 30), property transactions tumbling ("Hong Kong property transactions drop by 48 per cent", July 30), business confidence being eroded ("Hong Kong protests, government 'inability to address concerns damaging business confidence", July 30) and local and international commuters hindered ("Extradition bill protesters cause rush hour chaos", July 24). This can't go on.
The protesters say they are concerned about Beijing's tightening rule. If they keep going with their violent protests, they're about to find out what that looks like.
Let's have a new poll and be guided by the Hong Kong majority, not the minority, the self-deluded and increasingly violent protesters.
Peter Forsythe, Discovery Bay
********
Hong Kong protests are the product of a government that failed to read the pulse of the youth   (Scroll down for my letter)